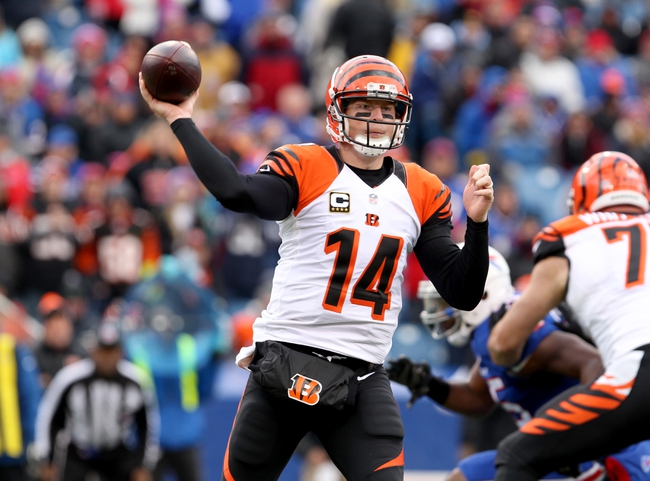 We have reached the mid way point of the NFL season and while some of you are long gone from Survivor Pools there are a ton of you left and are geared up for another week of exciting action. Here are this weeks Top Plays, Pool Breakers, and Pool Makers.

This one should jump off the page right away and while some may be hesitant due to the fact it is a divisional show down in prime time and Johnny Manziel is getting the call, I think we can put that to rest. The Bengals are undefeated for a reason and it'll certainly take more than the Browns to knock them off their perch and with the Bengals coming off their bye week this should be a cake walk. Cincy has too much on offense and defense for the Browns and this is a game I would recommend taking in a suvivor format.

The Patriots continue to stomp the competition and did so again last week against the Dolphins as they made it clear they are still the team to beat not only in the AFC East but in the conference as a whole. New England is still furious with how things went down in the off season with Deflate Gate and they would love to stick it to Roger Goodell by skating through the regular season undefeated and perhaps repeat as Super Bowl champions. Tom Brady is in freak mode right now and everyone else around him is clicking and it'll take more than Kirk Cousins and a mediocre Redskins team to slow him down, especially at Gillette Stadium.

The Jets got thumped on the road in Oakland last weekend and lost Ryan Fitzpatrick in the process and while he is expected to return to start this one against the Jags it is unclear how healthy his injured thumb really is. Luckily, it looks like Chris Ivory will be a full go despite a labouring hamstring injury and after their defense was embarrassed last weekend by giving up four touchdowns through the air against Oakland I think Revis and Co. will show up to play back home. The Jags have some sneaky players but this is a bad spot as they catch a Jets team who is livid after last week and will be playing to keep their playoff hopes intact.

Two NFC playoff contenders meeting up in Minnesota should make for a very exciting contest but is a complete red flag in terms of wagering in my opinion. The Vikings defense has been nice to watch but they haven't been able to piece things together offensively the way they had hoped while the Rams have found a gem in Todd Gurley who is tearing apart the league right now but can't rely on Nick Foles to do much of anything. In a game where defense and the ground game should tell the tale I think this game will be a complete toss up and while the Vikes may have the edge being at home I wouldn't buy into them quite yet. Stay away from this one.

The Broncos looked like world beaters against one of the league's best last weekend as they pasted the Packers on Sunday Night Football and when you look at win-loss this game looks like a cake walk. However, whenever Peyton Manning and Andrew Luck face off there are always fireworks and while Manning would love to come into his old stomping grounds and come away with another big time win this game just oozes of a let down spot after last week's monumental victory. Sure, the Broncos defense is ridiculous right now and the Colts are struggling on both sides of the ball this game to me seems like it has red flags all over and is one I am definitely staying away from.

Is there anyone else in the league worse than the Tennessee Titans right now? It is tough to find a suitor as they have been through the wood work this season and haven't looked at all. Marcus Mariota may return to action in the team's first game since firing Ken Whisenhunt and while the Saints are coming off a shootout win against the Giants at home last weekend they should have more than enough in the tank to score some points this week. Drew Brees finally found his stride last week with SEVEN touchdown passes and while that is very unlikely to happen this week I think the New Orleans offense led by Brees and Mark Ingram will have enough to get New Orleans the win pretty comfortably in a spot where you can afford to take a flier in your pool.

The pick in this article is the opinion of the writer, not a Sports Chat Place site consensus.
Previous Pick
NFL News: Player News and Updates for 11/4/15
Next Pick
Bengals vs. Browns - 11/5/15 NFL Pick, Odds, and Prediction