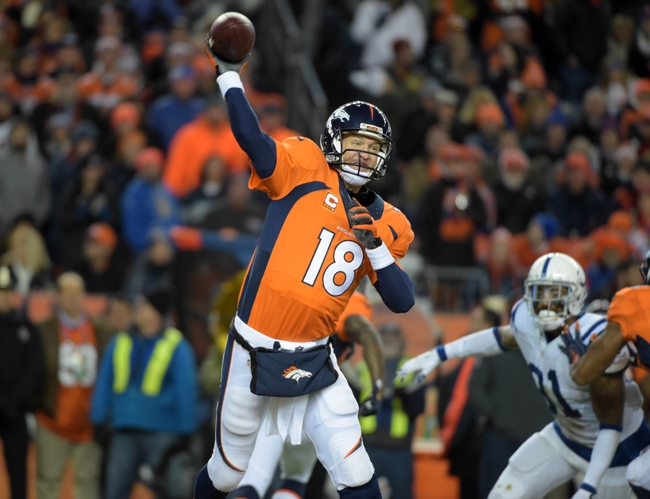 The Indianapolis Colts and the Denver Broncos face off on Sunday at Lucas Oil Stadium in a week 9 NFL match up.

The Indianapolis Colts are 3-5 this season but that is good enough for first place in the AFC South. The Colts offense is averaging 21.6 points and 352.2 yards per game and they have a minus nine turnover ratio. Colts QB Andrew Luck has taken a beating this season and he has completed 54.9 percent of his passes with 13 touchdowns and 12 interceptions. Frank Gore is pacing the Indy ground attack with 516 yards and three touchdowns and T.Y. Hilton has 38 catches and three touchdowns. The Colts defense is allowing 25.4 points and 404.9 yards per game with eight interceptions, five fumble recoveries, and 12 sacks. D’Qwell Jackson leads Indianapolis with 92 tackles, Jerrell Freeman has 60 tackles, and Dwight Freeney has 46 tackles. The Colts have turned the ball over far too much but they have been fortunate the AFC South has come up weak.

The Denver Broncos are 7-0 this season and they are all alone in first place in the AFC West. The Broncos offense is averaging 24 points and 350.7 yards per game and they have a plus five turnover ratio. Denver QB Peyton Manning has a homecoming of sorts as he played the bulk of his career in Indy and this season he has completed 62.8 percent of his passes with seven touchdowns and 11 interceptions. Ronnie Hillman is the Broncos top rusher with 383 yards and four touchdowns and Demaryius Thomas has 56 catches and Emmanuel Sanders has 40 receptions. The Denver defense ranks first in points allowed per game at 16.0 and yards allowed per game at 261.1 with nine interceptions, 14 fumble recoveries, and 29 sacks. Brandon Marshall is the Broncos leading tackler with 54, Danny Trevathan has 41 tackles, and T.J. Ward has 35 tackles. Denver looks to be a contender to go to the Super Bowl.

This is one of those games where I look for the Colts to rise to the occasion and at least cover but more likely win outright.