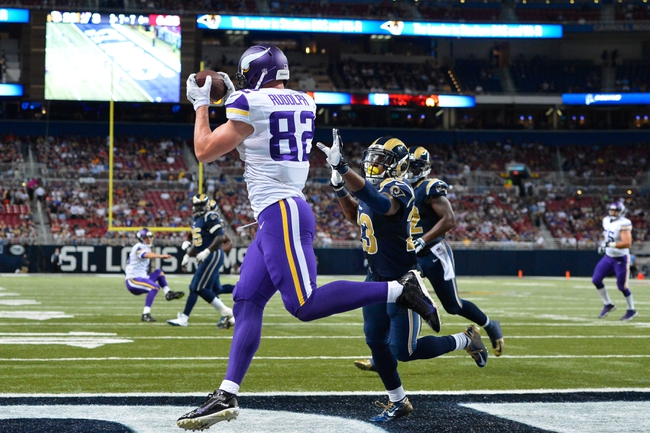 The Minnesota Vikings and the St. Louis Rams face off on Sunday at TCF Bank Stadium in Week 9 NFL action.

The Minnesota Vikings are 5-2 this season and they are in second place in the NFC North. The Vikings offense is averaging 21 points and 325.7 yards per game and they have a plus one turnover ratio. Minnesota QB Teddy Bridgewater has completed 64.5 percent of his passes with six touchdowns and five interceptions. Adrian Peterson leads the Vikings ground attack with 633 yards and three touchdowns and Mike Wallace is their top receiver with 26 catches and Stefon Diggs has 25 catches. The Vikings defense has been outstanding allowing 17.4 points and 334 yards per game with four interceptions, four fumble recoveries, and 18 sacks. Harrison Smith is Minnesota’s top tackler with 44, Eric Kendricks has 42 tackles, and Anthony Barr has 35 tackles. The Vikings still look like they can improve and should be at least a threat to make the playoffs.

The St. Louis Rams are 4-3 this season and that puts them in second place in the NFC West. The Rams offense is averaging 19.3 points and 311.6 yards and they are plus three in turnover ratio. Rams QB Nick Foles has completed 58.8 percent of his passes with seven touchdowns and five interceptions. The St. Louis rushing game is anchored by Todd Gurley who has rushed for 575 yards and three touchdowns and Tavon Austin is the top receiver with 24 catches and four touchdowns. The Rams defense is allowing 17.9 points and 328.1 yards with five interceptions, 10 fumble recoveries, and 26 sacks. James Laurinaitis leads St. Louis with 52 tackles, Mark Barron has 49 tackles, and Robert Quinn has 5.0 sacks. The Rams physical style makes them tough every week and if they stay the course they could make the playoffs.

This game could go either way as neither QB is dependable and both defenses are tough. I am going to go with the Vikings at home to cover but it is a lean at best.