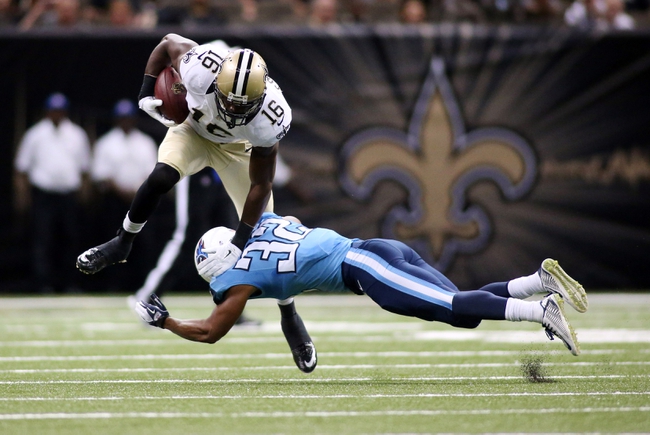 The New Orleans Saints and the Tennessee Titans face off on Sunday at the Mercedes-Benz Superdome in week 9 NFL action.

The New Orleans Saints are 4-4 this season and they have won their last three games. The Saints offense is averaging 26.6 points and 422.4 yards and they have a minus one turnover ratio. Saints QB Drew Brees is coming off of a seven touchdown game and overall he has completed 69.3 percent of his passes with 15 touchdowns and six interceptions. Mark Ingram leads the New Orleans ground attack with 530 yards and five touchdowns and Brandin Cooks has 41 receptions and three touchdowns. The Saints defense is allowing 29.2 points and 406.2 yards per game with four interceptions, nine fumble recoveries and 19 sacks. Stephone Anthony is the Saints lading tackler with 56, Kenny Vaccaro has 49 tackles, and Brandon Browner has 40 tackles. The Saints have a shot to make the playoffs but will have to finish strong and play better defense.

The Tennessee Titans have been in a tailspin and their 1-6 record has led to the firing of Head Coach Ken Whisenhunt. The Titans offense is averaging 17.9 points and 309.9 yards per game and they have a minus seven turnover ratio. Tennessee QB Marcus Mariota has been banged up but he has completed 64 percent of his passes with nine touchdowns and five interceptions. Antonio Andrews leads the Titans in rushing with 202 yards and two touchdowns and tight end Delanie Walker is the top receiver with 35 receptions. The Titans defense is allowing 22.7 points and 316.6 yards per game with eight interceptions, six fumble recoveries, and 18 sacks. Zach Brown leads Tennessee with 46 tackles, Wesley Woodyard has 41 tackles, and Michael Griffin has 36 tackles. The Titans are once again playing for next year.

The Saints are favored by better than a touchdown but I am not sure the Titans can put up enough points to even keep this close.