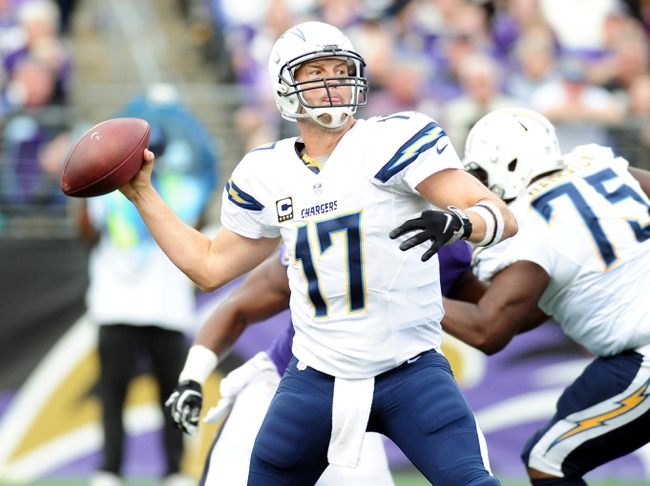 The Chicago Bears need this game if they have any hope of climbing out of a 2-5 hole. Jay Cutler is completing 61.8 percent of his passes for 1,442 yards, eight touchdowns and four interceptions. Cutler has four passing touchdowns in his last three games. Alshon Jeffery and Martellus Bennett have combined for 665 receiving yards and four touchdowns while Marquess Wilson has 18 receptions. The Chicago Bears ground game is averaging 109.9 yards per contest, and Matt Forte leads the way with 548 yards and two touchdowns. Defensively, Chicago is allowing 28.9 points and 342.3 yards per game. Christian Jones leads the Bears with 42 tackles, Pernell McPhee has five sacks and Kyle Fuller has four pass deflections. Matt Forte, Hroniss Grasu and Eddie Royal are questionable.

The San Diego Chargers also need a victory here in order to snap a four-game losing streak. Philip Rivers is completing 69.8 percent of his passes for 2,753 yards, 18 touchdowns and seven interceptions. Rivers has eight passing touchdowns in his last three games. Keenan Allen and Danny Woodhead have combined for 1,168 receiving yards and six touchdowns while Malcom Floyd has 21 receptions. The San Diego Chargers ground game is averaging 86.4 yards per contest, and Melvin Gordon leads the way with 382 yards on 103 carries. Defensively, San Diego is allowing 28.4 points and 362.9 yards per game. Eric Weddle leads the Chargers with 43 tackles, Jeremiah Attaochu has four sacks and Patrick Robinson has four pass deflections. Keenan Allen, Brandon Flowers and Eric Weddle are questionable.

Talk about a horrible Monday night game between two teams that are all but done as far as playoffs are concerned. Still, I think it goes without saying that the Chargers are the better team given their offensive ability and Rivers at quarterback. The Bears not only have a bad defense, but they also have a quarterback who can't make plays with any consistency.

I'll take the Chargers at home and the reasonable chalk.