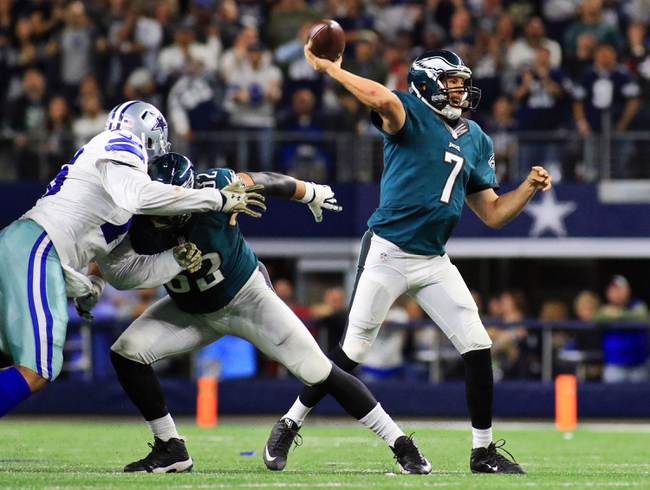 Finishing off the NFL’s Week 9 Sunday schedule on “Sunday Night Football,” we had an NFC East matchup featuring the Eagles and the Cowboys. Philadelphia was coming off a bye in Week 8, while the Cowboys were edged out by the Seahawks in their last appearance. This one ended up taking overtime to decide a winner.
Let’s check out some of the notable stats and players from this one so we can figure out why things played out the way they did. Afterward we’ll look ahead to Week 10 to see what’s in store for both teams.

What Happened: The scoring started out slow here. There were just two touchdowns in the first half--one for each side. Cole Beasley and Matt Cassel hooked up for a 5-yarder in the first quarter, and DeMarco Murray scored on a 1-yard run in the second. It was all knotted up at seven going into halftime.
After the break, the teams started putting up points. Ryan Mathews put Philly ahead on a 6-yard run, and Dallas responded with a 17-yard Beasley TD from Cassel.
In the fourth quarter the Eagles snagged a 67-yard interception return TD to take the lead again, but Dallas would respond with an 18-yard Dez Bryant receiving TD. Caleb Sturgis and Dan Bailey each traded a pair of field goals and we were going to overtime.
In the extra period, it didn’t take long for San Bradford to find Jordan Matthews for a 41-yard scoring TD that would put the nail in Dallas’ coffin.
Philly comes away with a big divisional win to move to 4-4, while the Cowboys flounder without starting QB Tony Romo at 2-6. This is their longest losing streak since 1989, when they dropped eight straight en route to a 1-15 season.

The Stars: The Eagles’ running game was working pretty well here. Murray, Mathews and Darren Sproles combined for 173 yards on the ground and two touchdowns. Murray also had 78 yards on six grabs. Matthews was the leading man through the air, with 133 yards and the score on nine grabs.
On the other side, Cassel actually played pretty well aside from the pick-6. He posted a 25-of-38 line for 299 yards and three scores. Beasley would finish with nine grabs for 112 yards and the two scores, while Bryant had 104 and his TD on five catches. Darren McFadden racked up 117 rush yards on 27 totes.

The Goats: After the first half, there wasn’t much defense to speak of here. The Eagles posted 459 net yards and the Cowboys had 411. Philly was pretty bad on third downs, with only a 3-of-13 success rate.
This was a pretty chippy game as well--most divisional games are. The teams combined for 18 penalties. Key among those were a pair of pass interference calls on Dallas’ final drive.

Injuries: The Cowboys lost a couple of linebackers in this one, most notably Sean Lee, who is the anchor of their defense. Lee suffered a concussion in the third quarter, his second concussion of the season.
His replacement, Anthony Hitchens, was hurt very soon thereafter. Hitchens would leave with an ankle injury, leaving the Cowboys dangerously thin at weak-side linebacker.

Outlook: Looking ahead to Week 10, both teams will be back in action on Sunday, November 15 at 1:00 PM ET. The Cowboys will head to Tampa to take on the Buccaneers (FOX) while the Eagles will host the incoming Dolphins (CBS).