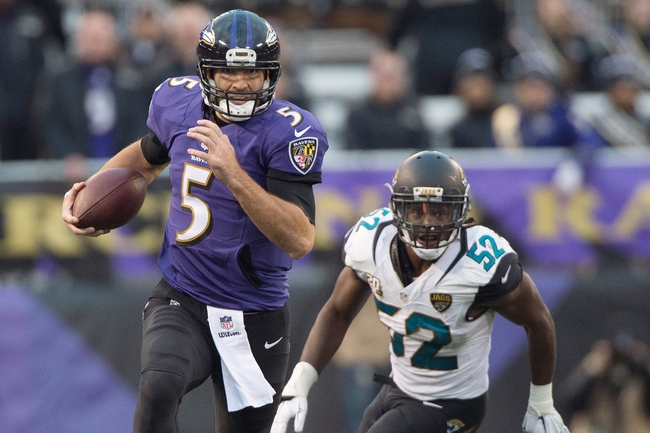 The Baltimore Ravens and the Jacksonville Jaguars face off on Sunday in Baltimore in week 10 NFL action.

The Baltimore Ravens have played in a lot of close games this season but all that they have to show for their efforts is a 2-6 record a third place in the AFC North standings. The Ravens offense is averaging 23.8 points and 357.2 yards per game and they are minus seven in turnover ratio. Baltimore QB Joe Flacco has completed 63.3 percent of his passes with 10 touchdowns and eight interceptions. Justin Forsett leads the Ravens ground attack with 562 yards and two touchdowns and Steve Smith was the top receiver but he is lost for the season so Kamar Aiken is the active team leader with 25 catches. The Ravens defense is allowing 26.8 points and 383.6 yards per game with three interceptions, 21 sacks, and two fumble recoveries. Daryl Smith leads the Ravens with 76 tackles, C.J. Mosley has 48 tackles, and Will Hill has 40 tackles. The Ravens simply haven’t created enough opportunities and that has been the difference between winning and losing.

The Jacksonville Jaguars are 2-6 this season and that lands them in third place in the AFC South. The Jaguars offense is averaging 21.2 points and 354.4 yards per game with a minus seven turnover ratio. Jags QB Blake Bortles has completed 56.3 percent of his passes with 17 touchdowns and 10 interceptions and he has rushed for 178 yards. T.J. Yeldon is Jacksonville’s leading rusher with 470 yards and Allen Robinson is the top receiver with 40 catches and Allen Hurns has 36. The Jaguars defense has allowed 29.4 points and 357.8 yards per game with three interceptions, 18 sacks, and nine fumble recoveries. Telvin Smith is Jacksonville’s leading tackler with 75, Paul Posluszny has 63, and Johnathan Cyprien has 48 tackles. The Jaguars appear to have things going in the right direction but it’s just a matter of how long it takes for them to get there.

This looks to be a close game as these teams play in a lot of close games and this one figures to be close as well so the points should come in handy.