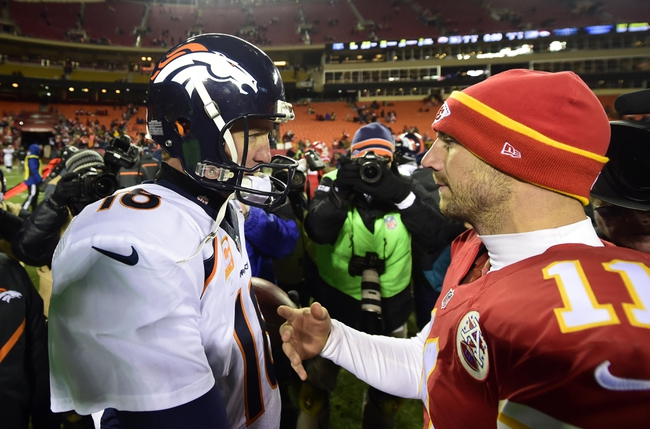 The Kansas City Chiefs look for their third straight victory to remain in the playoff hunt. Alex Smith is completing 63.4 percent of his passes for 1,969 yards, nine touchdowns and three interceptions. Smith has four touchdown passes in his last three games. Jeremy Maclin and Travis Kelce have combined for 1,104 receiving yards and five touchdowns while Albert Wilson has 12 receptions. The Kansas City Chiefs ground game is averaging 118.8 yards per contest, and Charcandrick West leads the way with 288 yards and two touchdowns. Defensively, Kansas City is allowing 22.8 points and 356.5 yards per game. Derrick Johnson leads the Chiefs with 43 tackles, Justin Houston has 5.5 sacks and Marcus Peters has 11 pass deflections. Ben Grubbs, Mike DeVito and Ramik Wilson are questionable.

The Denver Broncos haven’t lost two straight games since the 2012 season. Peyton Manning is completing 62.3 percent of his passes for 2,145 yards, nine touchdowns and 13 interceptions. Manning has thrown six picks in his last three games. Demaryius Thomas and Emmanuel Sanders have combined for 1,384 receiving yards and five touchdowns while Owen Daniels has 23 receptions. The Denver Broncos ground game is averaging 88.1 yards per contest, and Ronnie Hillman leads the way with 384 yards and four touchdowns. Defensively, Denver is allowing 17.4 points and 274.1 yards per game. Brandon Marshall leads the Broncos with 63 tackles, Von Miller has four sacks and Aqib Talib has eight pass deflections. Jordan Norwood and Shaquil Barrett are questionable while Demarcus Ware is out.

Manning clearly isn't the same Manning that he's been in the past, as he's throwing picks left and right. The Chiefs may struggle offensively, but Kansas City's secondary is no joke and will be able to take advantage of Manning's poor throws.

This should be a game that comes down to the wire, and I think the points will come in handy.