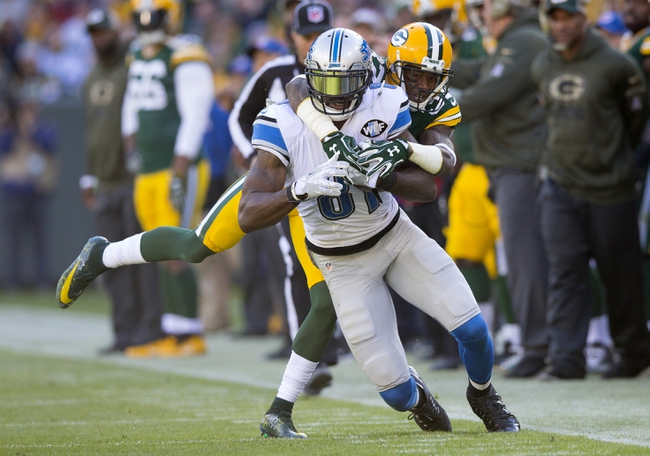 Mixed in with the Sunday Week 10 NFL schedule, we had an NFC North battle between the Lions and the Packers. Detroit was coming off a bye in Week 9, while the Packers couldn’t complete the comeback against the Panthers and dropped another game. This is a big rivalry matchup, so you can pretty much throw the records and standings out the window.
Let’s take a closer look at some of the key players and stats from this game so we can figure out why things played out the way they did. Afterward, we’ll look ahead to Week 11 to see what’s in store for both teams.

What Happened: There wasn’t a whole lot of offense to speak of early on. The sole score of the first quarter came on a 44-yard Mason Crosby field goal.
The scoreboard stayed 3-0 through the second quarter as both offensive units spun their wheels, leading to a cascade of boos from the crowd when the Packers were on the field. Even though the Lions didn’t have a third-down conversion for the entire half, they were able to get into field goal range and tie it up on a 49-yard Matt Prater field goal.
The three points in the first half were the fewest the Packers had scored in the first two quarters since December of 2013. Regardless, the teams went into the locker room knotted up at 3-3.
After the break, Ameer Abdullah jumpstarted the Lions with a stellar 104-yard kickoff return that set up his offense at the half-yard line. They’d punch it in a couple of plays later with a 2-yard Brandon Pettigrew touchdown from Matthew Stafford. After whiffing on the extra point, it was 9-3 Lions.
Detroit got some rhythm going offensively and marched down the field late in the third, but Ha-Ha Clinton-Dix posted a huge interception to stop the drive in its tracks. The Lions would get the ball back a short time later and Prater would make it 12-3 with a 51-yard field goal.
The offenses floundered as the fourth quarter wore on until Green Bay got back into it with an Aaron Rodgers to Richard Rodgers TD pass. That made it 12-10. A 43-yard Golden Tate reception set the Lions up with a first-and-goal on the next possession. They made it 18-10 with a Lance Moore touchdown, but Prater missed the extra point and it remained a one-score game.
The Packers marched down the field, ending with a Rodgers TD pass to Justin Perillo. The ensuing 2-point conversion was broken up, but the Packers recovered the onside kick. They gained enough yardage for a field goal attempt from 52 yards, which was no good.
The game ended as a nailbiter18-16 victory for the Lions. It was Detroit’s first win in Green Bay since December of 1991.

The Stars: This was more a case of bad offense than it was good defense, but we’ll give credit where it’s due. The Lions kept Green Bay in check most of the game, enabling their offense to do just enough to get the job done. Stafford would finish with 242 yards, two touchdowns and a pick. Calvin Johnson led the receivers with six grabs for 81 yards, but also whiffed on the onside kick.

The Goats: The Packers offense has sputtered in the beginning stages of games for at least a few weeks now, only gaining cohesion when it was too late.
All of these points would be moot, however, if Prater hadn’t missed those critical extra points. This was also a pretty ticky-tack game, with lots of possible interference penalties going uncalled.

Injuries: This was a hard-hitting game, so there are lots of injury notes. The Lions Nevin Lawson was injured in the second quarter, but was able to get up and come off the field. A short time later, Packers DB Damarious Randall was injured and had to come out.
In the third, David Bahktiari was getting worked on while sitting on the Packers sideline. He was carted to the locker room in the fourth. Jared Abbrederis was shaken up after hauling in a long pass with about six minutes remaining. T.J. Lang was also hurt on James Starks’ overturned fumble. The Lions’ Devin Lawson went down after a collision with Richard Rodgers late. Josh Wilson was hurt a couple of plays later.
Aaron Rodgers was limping on and off all game; he seemed to be saddled with an ankle issue.

Outlook: Looking ahead to Week 11, both teams will be back in action on Sunday, November 22. The Lions will host the Raiders (1:00 PM ET on CBS), while the Packers will head to Minnesota to visit the Vikings (4:25 PM ET on FOX).

The pick in this article is the opinion of the writer, not a Sports Chat Place site consensus.
Previous Pick
Top Ten Week 10 NFL Picks
Next Pick
Oakland Raiders vs. Minnesota Vikings - 11/15/15 NFL Pick, Odds, and Prediction