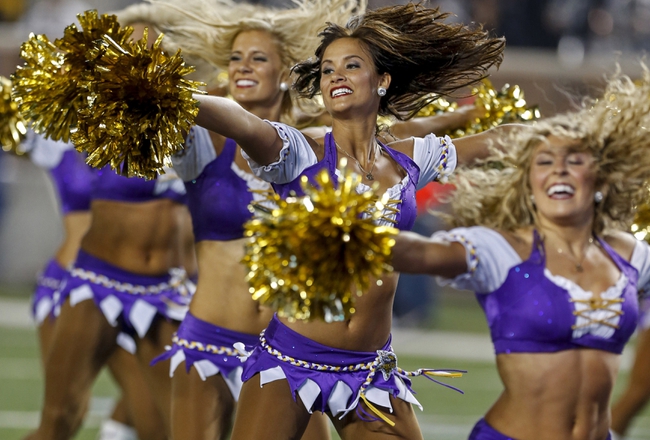 The Oakland Raiders and the Minnesota Vikings face off on Sunday in a week 10 NFL matchup of up and coming teams.

The Oakland Raiders are 4-4 this season and that has them in second place in the AFC West. The Raiders offense is averaging 26.6 points and 374.6 yards and they have a plus one turnover ratio. Oakland QB Derek Carr has completed 63.7 percent of his passes with 19 touchdowns and four interceptions. Latvius Murray is the Raiders top rusher with 630 yards and three touchdowns and Michael Crabtree is the top receiver with 47 catches and five touchdowns and Amari Cooper has 45 catches and four touchdowns. The Raiders defense is allowing 26.4 points and 411.5 yards per game with nine interceptions, 15 sacks, and six fumble recoveries. Malcolm Smith leads Oakland in tackles with 59 including three sacks, D.J. Hayden has 49 tackles, and Charles Woodson has 41 tackles. The Raiders are looking like they should be in the mix for a playoff spot.

The Minnesota Vikings are 6-2 this season and sit in second place in the NFC North with the same record as the division leading Green Bay Packers. The Vikings offense is averaging 21 points and 321.6 yards per game with a net zero turnover ratio. Vikings QB Teddy Bridgewater is banged up and questionable and if he can’t go it will be Shaun Hill. Adrian Peterson anchors the Minnesota rushing attack with 758 yards and four touchdowns and Stefon Diggs is the top receiver with 28 catches and Mike Wallace has 27 catches. The Vikings defense allows 17.5 points and 332.2 yards per game with four interceptions, 19 sacks and four fumble recoveries. Harrison Smith leads Minnesota with 44 tackles, Eric kendricks has 42 tackles and 4.0 sacks, and Anthony Barr has 41 tackles. The Vikings are very much in the hunt to win the NFC North.

Bridgewater is going to give it a go but I like the Raiders at home anyways.

The pick in this article is the opinion of the writer, not a Sports Chat Place site consensus.
Previous Pick
Detroit Lions at Green Bay Packers 11/15/15 NFL Score, Recap, News and Notes
Next Pick
Broncos vs. Chiefs - 11/15/15 NFL Pick, Odds, and Prediction