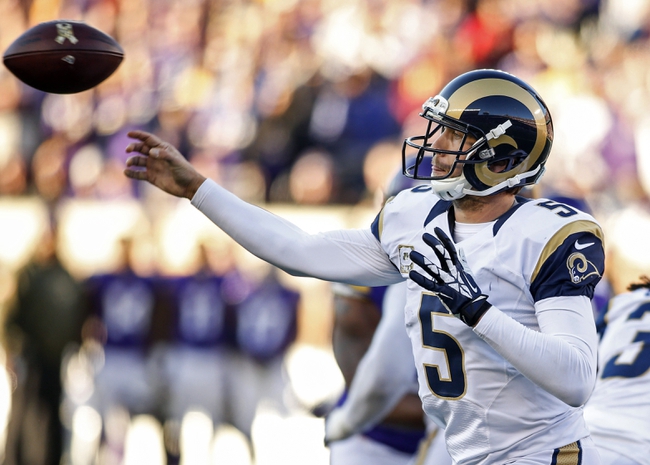 The Chicago Bears look for a big road win after splitting their last six games. Jay Cutler is completing 62.8 percent of his passes for 1,787 yards, 10 touchdowns and five interceptions. Cutler has four touchdown passes in his last three games. Alshon Jeffery and Martellus Bennett have combined for 873 receiving yards and five touchdowns while Marquess Wilson has 19 receptions. The Chicago Bears ground game is averaging 109.8 yards per contest, and Matt Forte leads the way with 548 yards and two touchdowns. Defensively, Chicago is allowing 27.6 points and 341.9 yards per game. Christian Jones leads the Bears with 49 tackles, Pernell McPhee has five sacks and Tracy Porter has four pass deflections. Eddie Royal and Hroniss Grasu are questionable while Matt Forte is doubtful.

The St. Louis Rams need a win here to get a game above a .500 record. Nick Foles is completing 58.2 percent of his passes for 1,478 yards, seven touchdowns and five interceptions. Foles has one touchdown pass in his last three games. Kenny Britt and Tavon Austin have combined for 611 receiving yards and five touchdowns while Jared Cook has 20 receptions. The St. Louis Rams ground game is averaging 135.5 yards per contest, and Todd Gurley leads the way with 664 yards and four touchdowns. Defensively, St. Louis is allowing 18.3 points and 323.8 yards per game. James Laurinaitis leads the Rams with 60 tackles, Aaron Donald has 4.5 sacks and Janoris Jenkins has nine pass deflections. Chase Reynolds, Chris Long and Robert Quinn are questionable.

Both of these teams have been finding ways to lose and ways to win in the final minutes. In fact, the Bears have either won or lost their last five games by three or less points. While the Rams may win this game, this is too many points for me to pass up between two teams that have been so up-and-down this season.