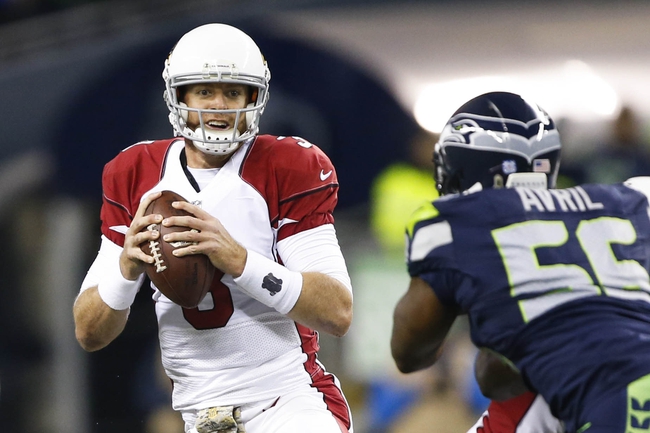 Rounding out the weekend NFL schedule on “Sunday Night Football” in Week 10, we had a key NFC matchup between the Cardinals and the Seahawks. Both teams were coming off a Week 9 bye, so they were fresh and relatively healthy for this game.
Let’s take a closer look at a few of the key stats and players from this one so we can figure out why things played out the way they did. Afterward we’ll look ahead to Week 11 to see what’s in store for both teams.

What Happened: This one was a pretty busy game, with lots of scoring on both sides. The barrage began in the second quarter, with the Cardinals coming out strong with a 33-yard Chandler Catanzaro field goal and a safety on a tackle of Seattle QB Russell Wilson. Carson Palmer and Michael Floyd hooked up on a couple of TD passes before the Seahawks could even get on the board with a Will Tukuafu TD run from a yard out.
Catanzaro added another field goal for a 22-7 lead at halftime.
After the break, Steven Hauschka traded field goals with Catanzaro before Seattle scored on a 32-yard Doug Baldwin pass from Wilson.
In the fourth, the Seahawks took the lead on a 3-yard Marshawn Lynch score and a 22-yard fumble return TD.
That didn’t faze the Cardinals, however, as they responded with a Jermaine Gresham TD from Palmer and an Andre Ellington 48-yard TD run to ice it. Hauschka bagged another field goal but Seattle wouldn’t score again.
Arizona takes firm control of the division with this 39-32 win; their record is now 7-2. Seattle falls to 4-5.

The Stars: The veteran Palmer is having a charmed season. He logged 363 yards in this one, with three TD passes. Larry Fitzgerald caught 10 of those balls for 130 yards, while Floyd would nab seven for 113 and two scores. Ellington had 88 total yards and his TD. Catanzaro nailed all three of his field goal tries and all four extra points.
On the other side, Doug Baldwin was the only real standout statistically, with his seven receptions for 134 yards and a TD.

The Goats: Seattle’s vaunted defense is normally indestructible at home, but Palmer picked them apart to the tune of 451 total yards and 30 first downs. The Seattle offense was stymied for most of the game, resulting in a 1-for-8 mark on third downs. The Seahawks also racked up 14 penalties for 131 yards. The Cardinals had nine for 71 yards. They also lost two fumbles.

Injuries: Cardinals guard Mike Iupati suffered a scary neck injury during the second quarter and had to be taken off the field in an ambulance. This could be a season-ender for him.
Also, Seahawks LB Bruce Irvin sprained his MCL. Paul Richardson and Tyler Lockett also came out due to injury.

Outlook: Looking ahead to Week 11, both teams will be back in action on Sunday, November 22. The Seahawks will welcome the 49ers to town (4:25 PM ET on FOX), while the Cardinals get another “Sunday Night Football” appearance when the Bengals come to visit (8:30 PM ET on NBC).