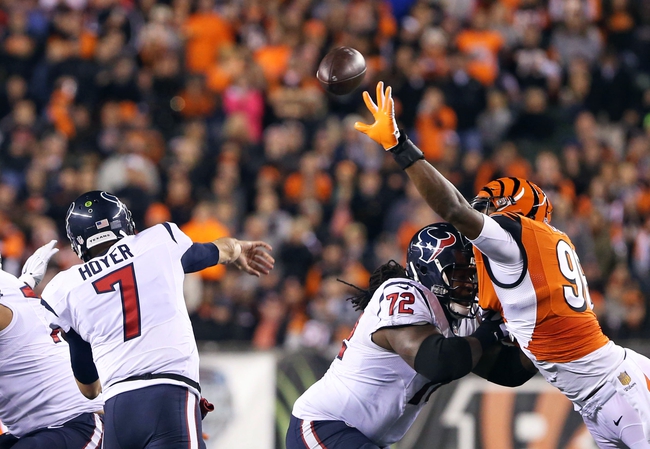 Rounding out the Week 10 NFL schedule on “Monday Night Football,” we had an AFC battle between the Texans and the Bengals. Houston was coming off a bye in Week 9, while the Bengals stayed undefeated with a victory over the Browns in their last appearance. This was a very physical game, and points were at a premium.
Let’s check out a few of the notable players and stats from the game so we can figure out why things played out the way they did. Afterward we’ll look ahead to Week 11 to see what’s in store for both teams.

What Happened: The Bengals were looking to join Carolina and New England as the only trio in NFL history to go 9-0 in the same season. The Texans had other ideas.
Field goals were the only thing on the menu in the first half: Mike Nugent nailed a 42-yarder in the first quarter, while Nick Novak tied the score in the second. Nugent would get another one from 39 before halftime, and we had a 6-3 Bengals advantage at the break.
The first half was marred with missed opportunities for both offenses and a poor run game, as evidenced by the two opposing quarterbacks leading their respective teams in rush yards through the first couple of quarters.
Neither team could get on the scoreboard in the third, so we moved on to the fourth quarter with a 6-3 game.
The game’s lone touchdown came on a T.J. Yates to DeAndre Hopkins hookup from 22 yards out. Hopkins made a stellar one-handed catch to secure the ball.
That 10-6 score would hold, and the Texans would hand the Bengals their first defeat of the season. Cincinnati is now 8-1, while Houston gets back into the AFC South conversation at 4-5.

The Stars: Yates was able to solve the Bengals defense, something starting QB Brian Hoyer wasn’t quite able to do. Yates would finish with 69 yards and a TD on 5-of-11 passing. Hopkins led the team with five grabs for 57 yards and the TD. Defensively, it was a great effort all around.
On the other side, there’s not a whole lot to get excited about aside from the solid defensive push. Cincinnati held Houston to 256 total yards.

The Goats: Speaking of 256 total yards, that’s all the Bengals offense was able to muster as well. It was a sputtering effort from that unit, with QB Andy Dalton posting a 22-of-38 line for 197 yards and a pick. Star WR A.J. Green also lost a fumble. The Giovani Bernard-Jeremy Hill RB combo was only able to amass 51 rushing yards on 15 carries.
Both the Texans and the Bengals could only manage 16 first downs each for the entire game.

Injuries: This was a hard-hitting game, so there were lots of bumps and bruises. Most notably, Bengals DB Adam Jones sustained a shoulder injury, and of course there was the concussion to Brian Hoyer early in the second half. He was replaced by Yates.

Outlook: Looking ahead to Week 11, both teams will be back in action on Sunday, November 22. The Texans will host the Jets (1:00 PM ET on CBS), while the Bengals get another primetime game on the road against the Cardinals on “Sunday Night Football” (8:30 PM ET on NBC).