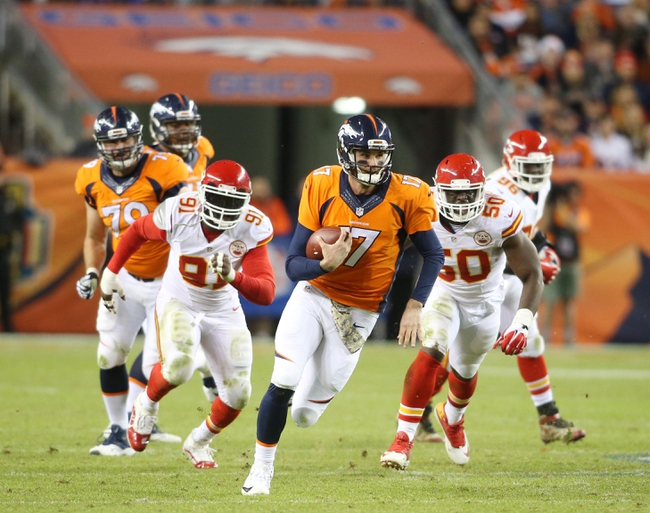 NFL Updates: News From Around the League, Week 11 Schedule and More

The NFL’s Week 11 schedule will be kicking off tonight as the Titans and Jaguars get going in Jacksonville. In the meantime, let’s visit some of the headlines and see which players are in the news.

The Broncos-Bears game this weekend will be one of the most intriguing matchups on the schedule. Denver has to turn to backup QB Brock Osweiler with starter Peyton Manning injured, and no one’s quite sure how things will go.
The coaching staff says they’re not going to scale the offense back for Osweiler’s sake, as he’s spent four years behind Manning and should know things in and out. This week will prove to be a solid test of that sentiment.

Speaking of the Bears, they’ve got something of an odd situation at running back. With Matt Forte hurt, Jeremy Langford has been stellar. Once Forte gets back, it’ll be interesting to see what Chicago does with the touches.
Forte is set to be an unrestricted free agent this off-season, and probably won’t re-sign with the Bears. Chicago is trying to push for a possible playoff berth this season, so we may see a timeshare moving forward.

The Falcon’s Leonard Hankerson should be able to get back on the field after the Falcons’ bye. He’s been out with a hamstring injury for the past couple of games.
With Hankerson out, Roddy White posted just three catches for 44 yards. It’ll be a better situation for all involved once Hankerson gets back out there.

The Seahawks have a couple of major injury concerns heading into Week 11. First off, there’s RB Marshawn Lynch. He didn’t practice yesterday due to an abdomen issue. He was reportedly sore coming out of the Seahawks’ last game, but should be able to return for Sunday.
Also, WR Doug Baldwin was limited in practice yesterday with a toe issue. He’ll likely be okay for Week 11 as well.

Brian Hoyer will likely be missing Sunday’s game against the Jets due to his concussion. That means it will be T.J. Yates going against that normally-stout New York defense.

NFL Week 11 Schedule: Let’s take a look at the upcoming round of games on the NFL schedule, along with the start times and TV networks you can catch them on.

The pick in this article is the opinion of the writer, not a Sports Chat Place site consensus.
Previous Pick
Top Ten Worst 2015 NFL Week 10 Injuries
Next Pick
Jaguars vs. Titans - 11/19/15 NFL Pick, Odds, and Prediction