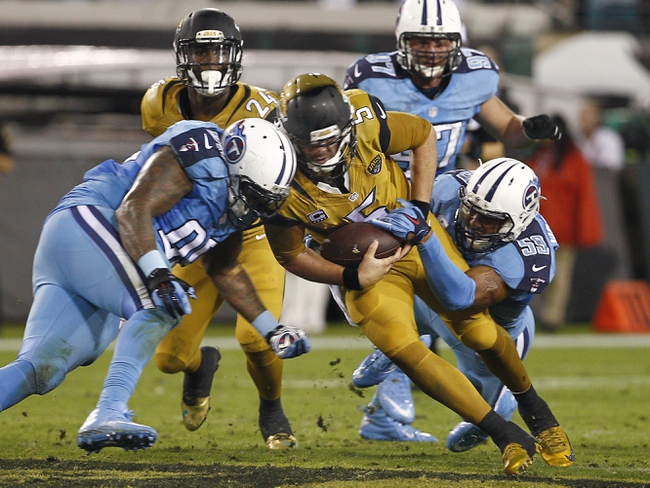 Kicking off the Week 11 NFL schedule on “Thursday Night Football,” we had a divisional matchup between the Titans and the Jaguars. Tennessee was coming off a loss against the Panthers in their last appearance, while Jacksonville scored a rare win over the Ravens in Week 10. Both teams were trying to keep pace in the jumbled AFC South here. There was still plenty of hope, as .500 football just might do it in that division.
Let’s check out some of the notable players and stats from this one so that we can figure out why things happened the way they did. Afterward we’ll look ahead to Week 12 to see what’s in store for both teams.

What Happened: Points were at something of a premium in this game, as neither offense has much firepower. Field goals ruled the opening half, with Tennessee’s Ryan Succop nailing a 47-yarder for the lone score of the first quarter.
In the second, the Jags’ Jason Myers got in on the action with a 31-yard field goal and a 32-yard field goal, which sandwiched around a 49-yard Succop kick.
After a busy first half for the kicking teams, it was all tied up at 6-6.
When the teams emerged from the locker room, the next score came on a 20-yard Myers field goal. Tennessee was the first team to get it into the end zone, as QB Marcus Mariota scrambled for a 23-yard touchdown and retook the lead.
In the fourth quarter, the Jags took advantage of a great punt return and scored on the very next play. Blake Bortles hooked up with TE Julius Thomas for a 5-yard TD pass.
Myers would pad the lead with one final field goal, this one from 36 yards out.
Tennessee had a chance to steal the win with one final play, but Mariota was sacked before he could get the ball out. It ended 19-13 Jags.
The Jaguars have won consecutive games for the first time in quite a while. They’re 4-6 and right in the mix for the division lead. The Titans drop to 2-8 with the loss.

The Stars: We’re not shy about giving accolades to kickers in this spot, and Myers definitely earned it. He nailed all four of his field goals and his extra point. Allen Robinson led the team in receiving with 113 yards on five grabs. Bortles was efficient (21-of-30) but had two turnovers. Rashad Greene’s 63-yard punt return set up the Thomas touchdown.
On the other side, Delanie Walker posted eight receptions for 109 yards in another big game. Antonio Andrews had 94 total yards on 17 touches.

The Goats: Phillip Supernaw had a costly fumble late for Tennessee after the Thomas score, which hurt their comeback chances. Neither team looked terribly remarkable on either side of the ball, and the Jaguars had some troubles in the red zone, failing on their first three attempts and botching a good opportunity on questionable play-calling in the third.

Injuries: Bortles was treated for dehydration on the sidelines briefly during the game, but he would end up being fine.
RB Dexter McCluster went down in the second half with a leg injury and was not able to return.

Outlook: Looking ahead to Week 12, both teams will be back in action on Sunday, November 29th at 1:00 PM ET on CBS. The Titans will host the Raiders, while the Jaguars will welcome the incoming Chargers.

The pick in this article is the opinion of the writer, not a Sports Chat Place site consensus.
Previous Pick
Jaguars vs. Titans - 11/19/15 NFL Pick, Odds, and Prediction
Next Pick
Top Five Best Week 11 NFL Bets