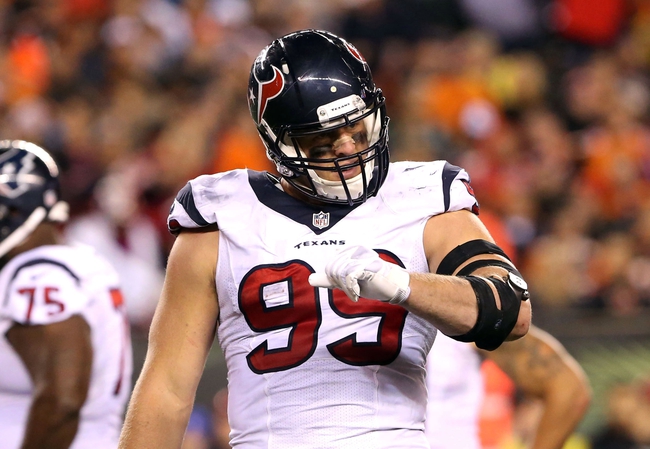 The Houston Texans and the New York Jets face off on Sunday in a week 11 NFL matchup.

The Houston Texans are 4-5 this season and are very much in the hunt for the AFC South title. The Texans offense is averaging 20.4 points and 356.8 yards per game with a minus one turnover ratio. Houston QB Brian Hoyer left Monday Night’s win over the Bengals with a concussion and his status for this one is unknown but if he can’t go it will be T.J. Yates who didn’t look prepared to play in his first action. Alfred Blue is the Texans leading rusher with 295 yards and a touchdown and DeAndre Hopkins is the top receiver with 71 catches and seven touchdowns. Defensively the Texans are allowing 23.4 points and 340.3 yards per game with seven interceptions, 23 sacks, and five fumble recoveries. Brian Cushing is Houston’s leading tackler with 76, J.J. Watt has 42 tackles and 9.5 sacks, and Whitney Mercilus has 5.5 sacks. The Texans appear to be getting healthier but every week still seems like a different group of faces on the field.

The New York Jets are 5-4 this season and they are in third place in the AFC East. The Jets offense is averaging 24.1 points and 360.6 yards with a plus three turnover ratio. New York QB Ryan Fitzpatrick has completed 59.7 percent of his passes with 15 touchdowns and nine interceptions. Chris Ivory leads the Jets rushing attack with 643 yards and six touchdowns and Brandon Marshall is the top receiver with 57 catches and six touchdowns and Eric Decker has 42 catches and seven touchdowns. The Jets defense is allowing 20.4 points and 318.4 yards per game with 10 interceptions, 21 sacks, and nine fumble recoveries. David Harris leads the Jets defense with 64 tackles, Demario Davis has 54 tackles, and Marcus Gilchrist has 45 tackles. The Jets are coming off of a long week of rest after playing a Thursday Night game last time out.

The line for this one isn’t out yet because of the injuries to the QB’s so please check back and I will update this my free pick.

Mitch’s Pick Please Check Back When The Line Is Updated