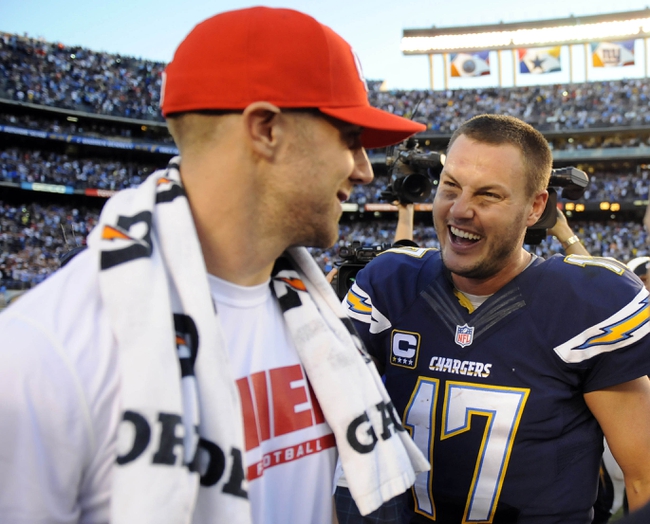 The Kansas City Chiefs look for their fourth straight victory to get back to a .500 record. Alex Smith is completing 62.5 percent of his passes for 2,173 yards, 10 touchdowns and three interceptions. Smith has four touchdown passes in his last three games. Jeremy Maclin and Travis Kelce have combined for 1,157 receiving yards and five touchdowns while Albert Wilson has 13 receptions. The Kansas City Chiefs ground game is averaging 117.3 yards per contest, and Charcandrick West leads the way with 357 yards and three touchdowns. Defensively, Kansas City is allowing 21.7 points and 341.4 yards per game. Derrick Johnson leads the Chiefs with 50 tackles, Justin Houston has 7.5 sacks and Marcus Peters has 13 pass deflections.

The San Diego Chargers hope a feel good win could help climb them out of a 2-7 hole. Philip Rivers is completing 69 percent of his passes for 3,033 yards, 19 touchdowns and seven interceptions. Rivers has seven touchdown passes in his last three games. Danny Woodhead and Malcolm Floyd have combined for 930 receiving yards and six touchdowns while Stevie Johnson has 31 receptions. The San Diego Chargers ground game is averaging 85.3 yards per contest, and Melvin Gordon leads the way with 413 yards on 114 carries. Defensively, San Diego is allowing 27.7 points and 372.1 yards per game. Eric Weddle leads the Chargers with 56 tackles, Melvin Ingram has four sacks and Brandon Flowers has four pass deflections. Patrick Robinson, Darrell Stuckey and Denzel Perryman are questionable.

The Chargers are a complete mess right now and are going up against a Chiefs team that's starting to find their swagger again. San Diego doesn't even have a home feld anymore, as every game at Qualcomm sounds like an away game. Kansas City should have no problem rolling in this game based on what we've seen the last few weeks.

The pick in this article is the opinion of the writer, not a Sports Chat Place site consensus.
Previous Pick
Denver Broncos at Chicago Bears 11/22/15 NFL Score, Recap, News and Notes
Next Pick
Minnesota Vikings vs. Green Bay Packers - 11/22/15 NFL Pick, Odds, and Prediction