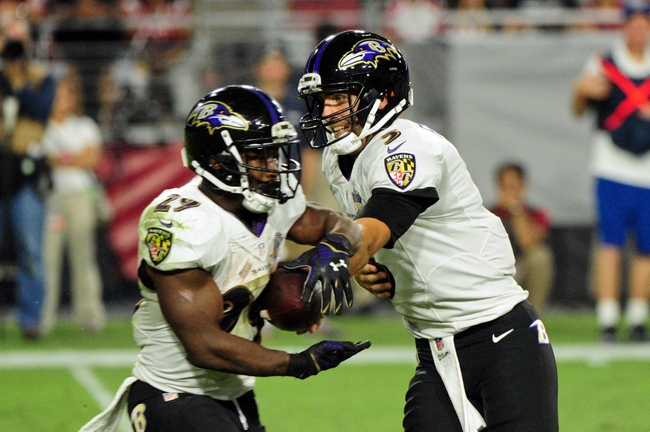 Week 11 is officially in the books with a tough loss for the Buffalo Bills last night.  With that, it’s time for our usual Tuesday morning injury report. As always, you’ll see a rundown of the top ten worst injuries of the NFL week below. Some of these are pretty rough, especially if you’re a Baltimore fan. I’m thinking about starting a petition to change the expression to “Dropping like Ravens”.

1. Baltimore Ravens QB Joe Flacco tore both his ACL and his MCL on the final drive of Sunday’s win over the St. Louis Rams. Flacco actually finished the final three plays with the injuries before heading to the sideline; talk about tough. Flacco, who is expected to undergo surgery once the swelling in his knee subsides, will miss the remainder of the 2015 season, with back-up Matt Schaub taking over starting duties in Week 12.

2. The Baltimore Ravens also lost starting RB Justin Forsett during Sunday’s win. Forsett’s double bone forearm fracture takes the prize as the most horrific injury of the weekend. His arm was twisted to just about a 90 degree angle before he was taken off the field. Forsett will undergo surgery to repair his ulna and his radius and will be placed on season-ending IR. The biggest concern here is how this gruesome incident will impact Forsett’s career going forward.

3. Indianapolis Colts LT Anthony Castonzo (AKA the most effective member of the team’s offensive line) suffered an MCL sprain in Sunday’s win over the Atlanta Falcons. Castonzo is currently listed as week-to-week and is not expected to start during Week 12’s contest against the Tampa Bay Buccaneers.

4. Kansas City Chiefs RB Charcandrick West, who has really stepped-up in the absence of starter Jamaal Charles, sustained a hamstring injury during Sunday’s blowout win over the San Diego Chargers. While the severity of West’s injury hasn’t yet been announced, he is likely to be listed as questionable for Week 12. On the bright side, third-stringer Spencer Ware did an excellent job when West was sidelined.

5. The Atlanta Falcons lost starting RB Devonta Freeman early in their loss to the Indianapolis Colts. Freeman sustained a concussion and will go through the league’s concussion protocol, which generally takes a minimum of five days to complete. Given the disastrous game that back-up Tevin Coleman had on Sunday, Falcons Nation should be hoping that Freeman is reinstated sooner rather than later.

6. Seattle Seahawks RB Marshawn Lynch was a last-minute addition to Sunday’s list of inactives. Lynch seems to be suffering from an abdomen issue that, according to head coach Pete Carroll, “is legitimately bothering him.” The general consensus is that Lynch may be dealing with a sports hernia. Back-up Thomas Rawls had himself a day, though, putting-up the best RB numbers of the week, so there’s not too much to be concerned about if Lynch doesn’t return soon.

7. The New York Jets lost stalwart C Nick Mangold to a hand laceration during Sunday’s loss to the Houston Texans. The cut is located between the 4th and 5th fingers of his snapping hand, but knowing Mangold, he won’t let it get to him. I look for the starter to be ready to roll this weekend.

8. Also in New York Jets injury news, CB Darrelle Revis left Sunday’s contest in the second half with a concussion. Revis will go through the standard concussion protocol and could return as early as Week 12.

9. Washington Redskins LT Trent Williams went down with an apparent left knee injury late in Sunday’s massive loss to the Carolina Panthers. Williams initially appeared to be okay, but was then carted off the field. Post game, head coach Jay Gruden stated that Williams bruised his patellar tendon. He is currently considered day-to-day, but is likely to be on the field this weekend.

10. Indianapolis Colts Pro Bowl CB Vontae Davis was sidelined with a hamstring injury on Sunday. Colts fans are hoping no news is good news, as the team’s front office has yet to issue any updated information on Davis’s status for Week 12.

The pick in this article is the opinion of the writer, not a Sports Chat Place site consensus.
Previous Pick
Top Ten Takeaways From Week 11 in the NFL
Next Pick
Top Five NFL Week 12 Games