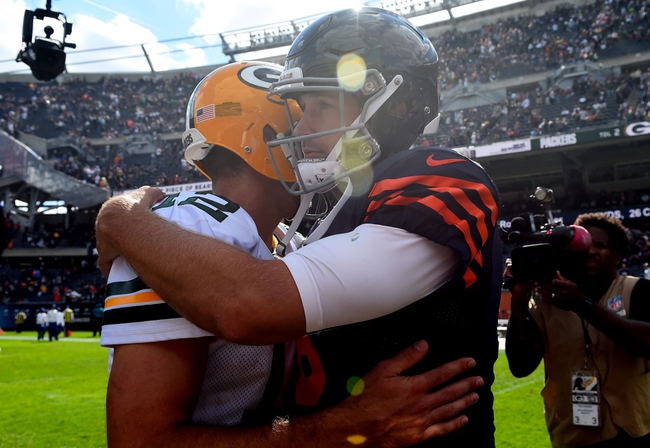 The Chicago Bears look for their fourth road win after splitting their last eight games. Jay Cutler is completing 63.4 percent of his passes for 2,310 yards, 13 touchdowns and six interceptions. Cutler has five touchdown passes in his last three games. Alshon Jeffery and Martellus Bennett have combined for 940 receiving yards and five touchdowns while Marquess Wilson has 24 receptions. The Chicago Bears ground game is averaging 111.7 yards per contest, and Matt Forte leads the way with 548 yards and two touchdowns. Defensively, Chicago is allowing 25.1 points and 340.9 yards per game. Christian Jones leads the Bears with 60 tackles, Pernell McPhee has five sacks and Kyle Fuller has six pass deflections. Ka'Deem Carey, Alshon Jeffery and Antrel Rolle are questionable.

The Green Bay Packers hope to get back on track and stay on top of the NFC North standings. Aaron Rodgers is completing 61.7 percent of his passes for 2,482 yards, 23 touchdowns and three interceptions. Rodgers has two or more touchdown passes in five of his last six games. James Jones and Randall Cobb have combined for 1,145 receiving yards and 13 touchdowns while Davante Adams has 30 receptions. The Green Bay Packers ground game is averaging 109.6 yards per contest, and Eddie Lacy leads the way with 408 yards and two touchdowns. Defensively, Green Bay is allowing 19.8 points and 368.6 yards per game. Ha Ha Clinton-Dix leads the Packers with 72 tackles, Julius Peppers has 6.5 sacks and Damarious Randall has 12 pass deflections. Ty Montgomery is questionable with an ankle injury.

The Packers have beaten the Bears in 12 of the last 14 meetings, which includes an eight-point win over Chicago this season. The Packers defense looks like it's finally ready to step up and Rodgers always has the advantage over Cutler. When you add the short rest and the home field, Green Bay should be able to win this by double digits.

Even with the Bears finding ways to lose close games, they're still losses. Green Bay is also a step up in comp.

The pick in this article is the opinion of the writer, not a Sports Chat Place site consensus.
Previous Pick
Cowboys vs. Panthers - 11/26/15 NFL Pick, Odds, and Prediction
Next Pick
NFL News: Player News and Updates for 11/27/15