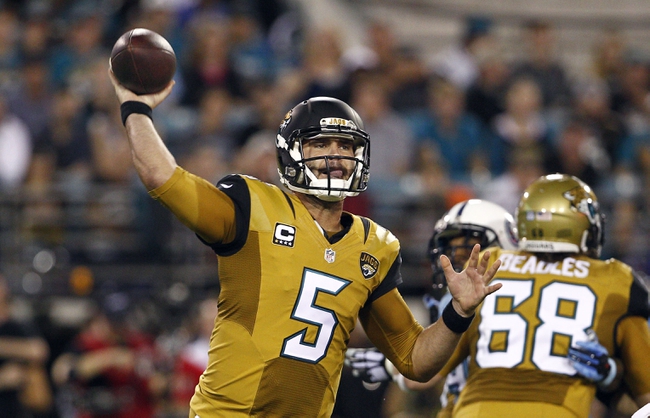 The San Diego Chargers appear to have thrown in the towel after six straight losses and a 2-8 record overall. Philip Rivers is completing 68.6 percent of his passes for 3,211 yards, 19 touchdowns and eight interceptions. Rivers has four touchdown passes in his last three games. Danny Woodhead and Stevie Johnson have combined for 935 receiving yards and five touchdowns while Ladarius Green has 28 receptions. The San Diego Chargers ground game is averaging 82 yards per contest, and Melvin Gordon leads the way with 450 yards on 129 carries. Defensively, San Diego is allowing 28.2 points and 373.4 yards per game. Eric Weddle leads the Chargers with 60 tackles, Melvin Ingram has four sacks and Jason Verrett has eight pass deflections. D.J. Fluker is questionable with a concussion.

The Jacksonville Jaguars look to keep picking up steam after winning three of their last four games. Blake Bortles is completing 56.5 percent of his passes for 2,623 yards, 20 touchdowns and 12 interceptions. Bortles has five touchdown passes in his last three games. Allen Robinson and Allen Hurns have combined for 1,587 receiving yards and 14 touchdowns while Bryan Walters has 29 receptions. The Jacksonville Jaguars ground game is averaging 95.4 yards per contest, and T.J. Yeldon leads the way with 585 yards and one touchdown. Defensively, Jacksonville is allowing 26.8 points and 357.5 yards per game. Telvin Smith leads the Jaguars with 97 tackles, Aaron Colvin has four sacks and Davon House has 17 pass deflections. Bernard Pierce, Michael Bennett and Nic Jacobs are questionable.

The Jacksonville Jaguars are actually starting to look like a fotball team and are gaining confidence each week. Meanwhile, the Chargers look like they've already scheduled vacation plans and can't wait for the season to end. When you add in the fact the Chargers have to travel across country, this is a game that could get very ugly.

I look for Jacksonville to win rather easily. San Diego is a team that's checked out.

The pick in this article is the opinion of the writer, not a Sports Chat Place site consensus.
Previous Pick
NFL Impact Injuries For Week 12 2015 11/29/15
Next Pick
Browns vs. Ravens - 11/30/15 NFL Pick, Odds, and Prediction