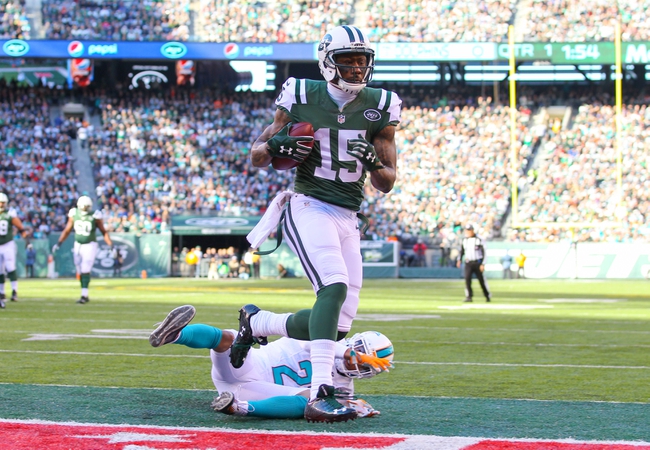 Mixed in with the Sunday Week 12 NFL schedule, we had an AFC East rivalry game between the Dolphins and the Jets. New York was coming off a listless defeat by the Texans, and Miami fell to the Cowboys in Week 11. Both teams needed a win to get back on track in the playoff race.
Let’s check out some of the notable players and stats from this one so we can figure out why things happened the way they did. Afterward, we’ll look ahead to Week 13 to see what’s in store for both teams.

What Happened: The Jets would strike first here. After a few missed short-yardage opportunities that stalled out their drives, Ryan Fitzpatrick hooked up with Brandon Marshall for a TD, making it 7-0 late in the first quarter.
That score would hold up until the waning seconds of the half, when Devin Smith grabbed his first TD reception as an NFL player (from 16 yards out) to cap off a long Jets drive, making it 14-0 at the break.
In the third, Fitzpatrick got another touchdown pass, this one on a slant to Eric Decker to make it 21-0. The Dolphins got it back to within two scores on a 5-yard Ryan Tannehill pass to Jarvis Landry, and that would do it for the quarter.
The Jets struck again early in the fourth, with Fiztpatrick and Marshall hooking up again on a 3-yard TD pass. They’d extend that lead on a fabulous Chris Ivory rush TD from 31 yards out to make it 35-7.
The Dolphins gained some offensive traction late in the fourth, with Tannehill finding Greg Jennings for a 5-yard score. New York would add to their lead on a 41-yard Randy Bullock field goal, and Miami capped it off with a Davante Parker TD catch from 33 yards out.
At the final horn, the Jets took this game 38-20. They strengthen their position in the AFC Wild Card hunt and sweep Miami for the first time in three years.

The Stars: Fitzpatrick was on his game in this one. He’d finish with 277 yards and four touchdowns. Marshall was his main beneficiary, with 131 yards and two touchdowns.
Tannehill had a good statistical game, with 351 yards and three touchdowns, but most of it came when Miami was too far out of it. Landry led all receivers with 13 grabs for 165 yards and his score.

The Goats: The Dolphins front seven played pretty well for most of the game, but didn’t get much help from their secondary. Fitzpatrick picked on Brent Grimes whenever he matched up with Marshall, and found some success.
Losing Mike Pouncey also hurt, as his absence created a lot of botched snaps and miscommunication.
Aside from a couple of big runs, the Jets had some trouble on the ground, which is usually a strong point for them. There were a few short-yardage situations throughout the game they should have picked up but were stuffed on.

Injuries: Lots of injury notes here; they came on quickly. Both Brice McCain and Jelani Jenkins of the Dolphins were injured on the first play from scrimmage. Rishard Matthews was hurt on a punishing hit and Jarvis Landry limped off a few plays later. Matthews would be taken to the locker room (rib/chest). Mike Pouncey was getting worked on while on the sidelines midway through the first quarter; he was carted off (right foot).
The Jets’ Marcus Williams came out following his interception, thanks to a knee injury. He would go to the locker room as well.
Jordan Phillips came out of the game during the second quarter, but would return. C.J. Mosley and Oliver Vernon were hurt on a play just before halftime, rounding out a very busy stretch of injury issues.
Jenkins would come back in the game after his initial ailment, but was injured again in the third quarter. Jarvis Landry hit his head on the turf and was down momentarily in the fourth, but was able to walk off the field and returned later.

Outlook: Looking ahead to Week 13, both teams will be back in action on Sunday, December 6 at 1:00 PM ET on CBS. The Jets will play what’s technically an away game at MetLife against the Giants, while the Dolphins will host the incoming Ravens.