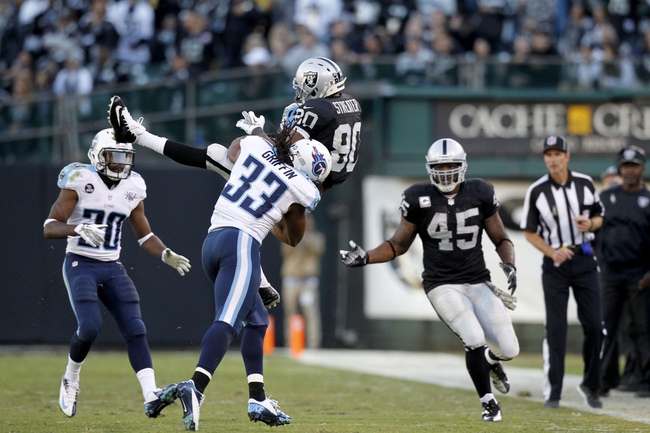 The Tennessee Titans and the Oakland Raiders face off on Sunday in Nashville in a week 12 NFL match up.

The Tennessee Titans are just 2-8 this season but they have made a lot of improvement over last season. The Titans offense is averaging 18.2 points and 321 yards with a minus seven turnover ratio. Tennessee QB Marcus Mariota has completed 65.3 percent of his passes with 13 touchdowns and six interceptions. Andrew Andrews is the Titans leading rusher with 376 yards and Delanie Walker has 53 catches and three touchdowns. The Tennessee defense is allowing 23.3 points and 324.3 yards per game with 10 interceptions, 31 sacks, and eight interceptions. Wesley Woodyard leads the Titans with 62 tackles and 5.0 sacks, Avery Williamson has 57 tackles, and Zach Brown has 56 tackles. The Titans haven’t won many games but they have been competitive and seem to be closer to turning it around than they are further away from it.

The Oakland Raiders are 4-6 this season as they are watching their playoff hopes slip away. The Raiders offense is averaging 24 points and 358.2 yards per game and they have a minus one turnover ratio. Oakland QB Derek Carr has completed 63.3 percent of his passes with 21 touchdowns and six interceptions. Latavius Murray leads the Raiders ground attack with 708 yards and four touchdowns and Michael Crabtree has 57 catches and five touchdowns. The Oakland defense is allowing 25.9 points and 405.2 yards per game with nine interceptions, 23 sacks, and seven fumble recoveries. Malcolm Smith leads the Raiders defense with 73 tackles including 4.0 sacks, D.J. Hayden has 56 tackles, and Charles Woodson has 52 tackles. The Raiders are an improved team over last season but they need to find their footing in a hurry.

The Titans are improving while the Raiders seem to be tailing off so getting the Titans as a home dog they are the play here.

The pick in this article is the opinion of the writer, not a Sports Chat Place site consensus.
Previous Pick
NFL Impact Injuries For Week 12 2015 11/29/15
Next Pick
Browns vs. Ravens - 11/30/15 NFL Pick, Odds, and Prediction