Top Ten Takeaways From Week 12 in the NFL 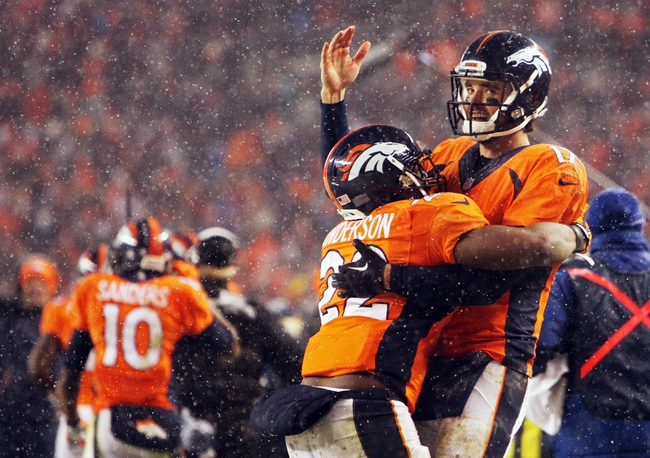 What a Week 12. As we head into the final month of the regular season, multiple NFL teams gave us games to write home about yesterday. As always, we’ll spend this Monday morning taking a look at the top ten takeaways of the weekend.

1. The New England Patriots are beatable.

10-1, Tom Brady. At the hands of Brock Osweiler. Any given Sunday, people. Though I was hoping against hope, I didn’t expect Brady v. Osweiler I to turn out quite the way it did. CJ Anderson's overtime touchdown run sealed the deal for the Broncos and knocked the New England Patriots down a notch. One bright spot for New England fans is that the initial reports surrounding Rob Gronkowski's potentially heinous knee injury are positive; it looks like he may not be lost for the season. Even with a 1 in the L column, keeping Gronk for the playoffs would still be a huge win for Pats fans.

Those are words I thought I’d never type. The Jets secured a huge win over the Miami Dolphins yesterday, taking a 35-7 lead at one point. Though the Fins did manage to make things a bit more respectable, with a final score of 38-20, the game was lopsided from the get-go. The 6-5 Jets are currently in the midst of the heated AFC wildcard battle and desperately needed this win to help compensate for losses to the Oakland Raiders, the Houston Texans, and the Buffalo Bills.

A couple of weeks ago, we took a look at the strange demise of the Green Bay Packers, who were once NFC Super Bowl favorites early in the season. On Thanksgiving Day, the Pack improbably lost at home to the Chicago Bears (you’re lying if you tell me you saw that one coming). The team has sustained some injuries, but they were still playing well even without Jordy Nelson earlier in the year. If Mike McCarthy can’t get his team together, they’re looking at a very short postseason.

4. The Minnesota Vikings could get a first-round bye.

Speaking of words I never thought I’d type. Teddy Bridgewater, Adrian Peterson, and the rest of the Vikings took full advantage of the Packers’ Thursday loss with a 20-10 win over the Atlanta Falcons yesterday. This catapulted them into first place in the NFC North and right into the thick of the battle for a first-round bye come January. They’ve got a tough schedule remaining, with games against the Seattle Seahawks, the Packers (again), and the Arizona Cardinals, so every win is critical.

The Kansas City Chiefs have taken spots on my Monday top tens for the past couple of weeks, but it’s time to give credit to the guy at the helm of this offense. Smithhasn’t thrown an interception in 283 attempts (since Week 3), which is the 4th longest streak in NFL history. If Smith and Co. can keep this up, their playoff opponents could have their work cut out for them.

6. The Atlanta Falcons are free-falling.

I’m not entirely certain what’s going on in Atlanta (other than the fact that they’ve had 17 turnovers in six games), but something’s gotta give or Dan Quinn could be out of a job after just one season, Cleveland Browns style. After starting the season 5-0, the Falcons have lost five of their last six, including yesterday’s match-up against the Vikings. In a situation that once seemed impossible, they’re almost out of the NFC playoff picture altogether.

7. Russell Wilson has proved his worth.

Wilson has taken a lot of flack this year for not progressing like he should’ve after his massive off-season contract extension. Yesterday, though, he managed to keep the Seahawks’ playoff dreams alive with the best performance of his career. Wilson went 21-30 for 345 yards, five touchdowns, and no interceptions. The team is now sitting at 6-5 and in prime position to make it to the postseason if they can continue playing like they did yesterday.

Say what you will about the teams Hasselbeck has faced, but the 40-year-old is currently 4-0 as a starter for the Indianapolis Colts this season. After yesterday’s 315-yard, two touchdown performance in a win over the Tampa Bay Buccaneers, it might be time to start considering leaving Hasselbeck in-place at least until the end of the regular season. Them’s fightin’ words in my house, but I stand by my opinion that it’s a valid option.

9. Blake Bortles should have a comedy show.

The “Blake Bortles Comedy Hour” has a certain ring to it, no? Although the man somehow managed to pass for 329 yards and two touchdowns in yesterday’s loss to the San Diego Chargers, he also made some hilarious mistakes. For instance, Bortles managed not one, but two (yes, you read that correctly), red-zone illegal forward passes. For someone getting paid to play the game of football professionally, it might time for good ol’ Blake to brush-up on the rulebook. I have a copy if anyone wants to get it to him…

After an incredible college career at Clemson, Watkins hasn’t had quite the NFL start everyone was expecting. In yesterday’s loss to the Kansas City Chiefs, though, he proved what he can do when given the opportunity. Watkins caught six out of 10 for 158 yards, playing like a holy terror. “Force the ball to me,” indeed. Are you listening, Rex Ryan?

The pick in this article is the opinion of the writer, not a Sports Chat Place site consensus.
Previous Pick
Browns vs. Ravens - 11/30/15 NFL Pick, Odds, and Prediction
Next Pick
Top Ten Worst 2015 NFL Week 12 Injuries