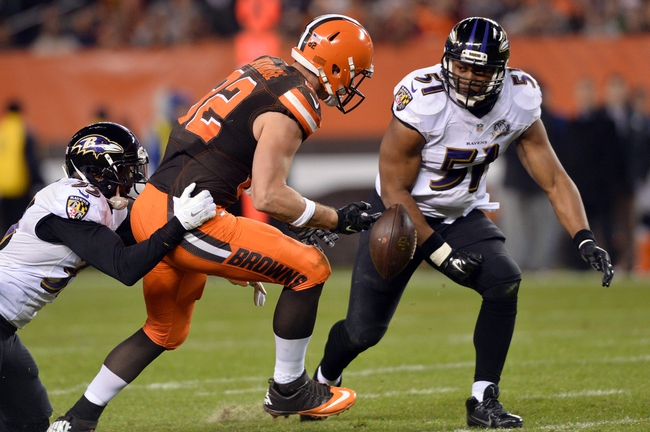 Wrapping up the NFL action on the Week 12 edition of “Monday Night Football,” we had an AFC North battle between the Ravens and the Browns. Baltimore was coming off a narrow 3-point win over the Rams, while the Browns were fresh after a bye in Week 11. This was an intense game with a wild finish that will go down as one of the highlights (or lowlights) of this rivalry.
Let’s take a closer look at a few of the key stats and players from this one so we can figure out why things played out the way they did. Afterward, we’ll look ahead to Week 13 to see what’s in store for both teams.

What Happened: Kaelin Clay got this bizarre game off to the races on a first-quarter punt return, which he took 82 yards for the first TD of the game. Justin Tucker would add a 49-yard field goal for a 10-0 Ravens edge after one quarter.
Travis Coons got the Browns on the board in the second with a 31-yard field goal, but the Ravens struck again on a Javorius Allen TD catch from 13 yards out courtesy of Matt Schaub.
The Browns got back in the game as the half wore down, scoring on a Josh McCown pass to Marlon Moore from 10 yards. Coons would add another 21-yarder for a 13-17 Ravens edge at halftime.
After the break, Karlos Dansby took an interception to the house from 52 yards to give the Browns their first lead. It wouldn’t last long, though, as Kamar Aiken scored on a 15-yard pass from Schaub.
In the fourth, Tucker bagged another field goal from 35 yards, but Travis Benjamin would tie it up on a 42-yard TD score from Austin Davis, who was replacing the injured McCown.
The Browns were in a position to kick a game-winning field goal with just a few seconds left on the clock, but the Ravens blocked it and Will Hill returned the ball 64 yards for the game-winning TD with no time left.
It was a uplifting 33-27 win for the Ravens, who have seen all their games this year be decided by a touchdown or less.

The Stars: Hill gets the nod here with his game-winning TD return. It was redemption for him, as he was beat on the Davis touchdown a short time earlier.
We had a couple of pretty good receiving lines here, with Aiken grabbing six for 80 yards and the TD, while Gary Barnidge (seven receptions; 90 yards) and Benjamin (six receptions; 90 yards; TD) led the Browns.

The Goats: It’s tough to beat up on either team here, as they’ve both been luckless this year with injuries and performance issues. That said, the Ravens were just 2-of-11 on third down. The Browns, meanwhile, had 63 net rushing yards.
We’ll leave it at that; both of these teams are simply playing out the schedule now.

Injuries: Both of these teams have plenty of injuries, and they certainly don’t need more. We’ll add Cleveland QB Josh McCown to the list, however, as he came out of the game due to a collarbone injury. He had been playing injured anyway and didn’t expect to start but the team benched hard-partying Johnny Manziel after the bye week.

Outlook: Looking ahead to Week 13, both teams will be back in action on Sunday, December 6 at 1:00 PM ET. The Ravens will head to Miami to see the Dolphins (CBS), while the Browns will host the incoming Bengals (FOX).

The pick in this article is the opinion of the writer, not a Sports Chat Place site consensus.
Previous Pick
Browns vs. Ravens - 11/30/15 NFL Pick, Odds, and Prediction
Next Pick
Top Ten Worst 2015 NFL Week 12 Injuries