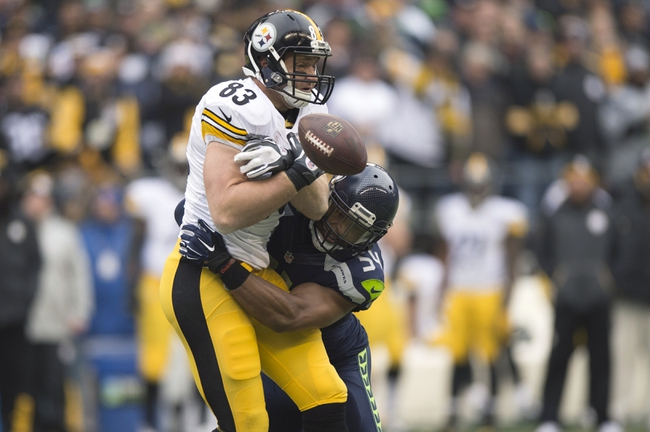 NFL Updates: News From Around the League, Week 13 Schedule and More

We’ve got just one more day to wait before the Packers and Lions get Week 13 in the NFL going on “Thursday Night Football.” While we’re waiting on that, let’s check out some of the notable players and situations out there in our daily wrap-up.

Heath Miller will be a player for Steelers fans to watch this week in practice. He’s reportedly going to be monitored all week due to his rib injury.
At this point, we’d classify Miller as questionable for the Colts game this weekend, but we’ll get more info as the week goes by.

The Patriots gave us another little nibble of information yesterday on the status of star TE Rob Gronkowski.
The team is calling him week-to-week with a bruised and sprained knee. The team went on to say that there’s no timetable in place for his return to action. It sounds like the Pats just got sick of people asking about Gronkowski’s status and decided to throw us a bone. We’ll consider him questionable heading into this week as well, but he’s probably closer to not playing.

Good news for Detroit WR Golden Tate, however. He was considered a full participant in practice yesterday.
Tate is dealing with a calf issue and should be good to go for Thursday’s big matchup against the Packers.

36-year-old Browns QB Josh McCown sustained a broken right collarbone in his team’s “Monday Night Football” loss to the Ravens. He’s now done for the season.
McCown won’t require surgery, which is fortunate. McCown is due a little over $4 million next year, so he’ll probably be staying put.
In the meantime, we’ll have to wait and see if the Browns go with Austin Davis or Johnny Manziel from here on out. Our money’s on Davis.

The Cardinals’ Andre Ellington is battling turf toe and is considered day-to-day by the team.
Ellington is “in doubt” for the Week 13 matchup against the Rams. We’d guess he’ll sit, which means David Johnson will handle the bulk of the RB workload.

NFL Week 13 Schedule: Let’s take a look at the upcoming round of games on the NFL schedule, along with the start times and TV networks you can catch them on.

The pick in this article is the opinion of the writer, not a Sports Chat Place site consensus.
Previous Pick
Top Ten Takeaways From Week 12 in the NFL
Next Pick
Top Five NFL Week 13 Games to Watch