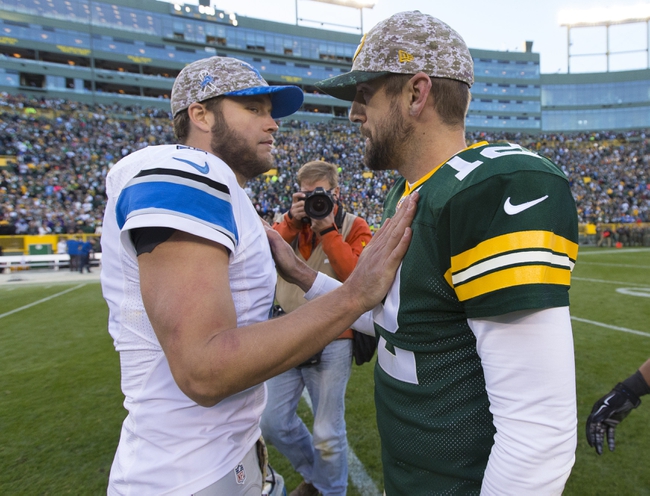 The Green Bay Packers need a big road victory after losing four of their last five games. Aaron Rodgers is completing 60.5 percent of his passes for 2,684 yards, 24 touchdowns and four interceptions. Rodgers has five passing touchdowns in his last three games. Randall Cobb and James Jones have combined for 1,219 receiving yards and 13 touchdowns while Davante Adams has 32 receptions. The Green Bay Packers ground game is averaging 115.7 yards per contest, and Eddie Lacy leads the way with 513 yards and two touchdowns. Defensively, Green Bay is allowing 19.5 points and 361.5 yards per game. Ha Ha Clinton-Dix leads the Packers with 80 tackles, Julius Peppers has six sacks and Damarious Randall has 12 pass deflections. Damarious Randall and Corey Linsley are questionable while Ty Montgomery is doubtful.

The Detroit Lions look to keep climbing out of their hole with a fourth straight victory here. Matthew Stafford is completing 64.9 percent of his passes for 2,944 yards, 20 touchdowns and 12 interceptions. Stafford has seven passing touchdowns in his last three games. Calvin Johnson and Golden Tate have combined for 1,473 receiving yards and eight touchdowns while Theo Riddick has 55 receptions. The Detroit Lions ground game is averaging 74.5 yards per contest, and Ameer Abdullah leads the way with 347 yards and one touchdown. Defensively, Detroit is allowing 26.2 points and 354.6 yards per game. Stephen Tulloch leads the Lions with 75 tackles, Ezekiel Ansah has 11.5 sacks and Darius Slay has 10 pass deflections. Gabe Wright, Glover Quin and Lance Moore are questionable.

I just can not trust the Packers right now, as they just lost to the Lions at home and lost to the Bears on Thanksgiving. Green Bay is clearly struggling with so many injuries on offense and the defense is way too inconsistent. Meanwhile, the Lions are playing their best ball of the season and are gaining confidence with each win over a playoff caliaber team.

This is more of a fade from Green Bay than it is confidence in Detroit. I have to take the free field goal here.

The pick in this article is the opinion of the writer, not a Sports Chat Place site consensus.
Previous Pick
Top Five NFL Week 13 Games to Watch
Next Pick
Green Bay Packers at Detroit Lions 12/3/15 NFL Score, Recap, News and Notes