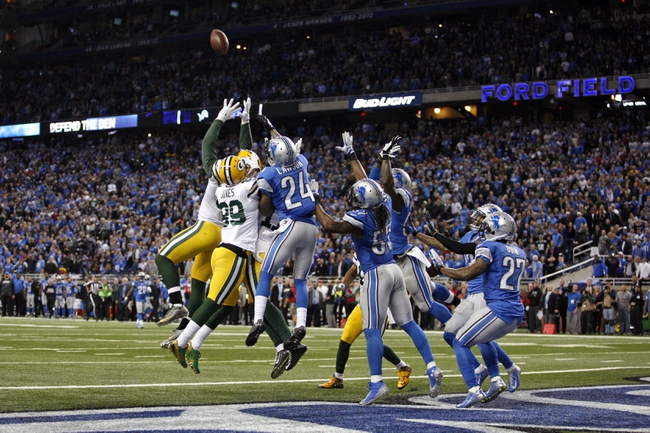 Kicking off the Week 13 festivities in the NFL, we had a great-looking NFC North matchup on “Thursday Night Football” between the Packers and the Lions. Both these teams last played on Thanksgiving; Green Bay dropped one to the Bears, while Detroit dismantled the Eagles. This will go down as one of the craziest games in this Packers-Lions rivalry, and it came down to the very last play.
Let’s check out some of the key stats and players from this game so we can figure out why things happened the way they did. Afterward, we’ll look ahead to Week 14 to see what’s in store for both teams.

What Happened: Early on, it was all Detroit in this one. Matt Prater nailed a 51-yard field goal to get the scoring going, and Eric Ebron grabbed a 3-yard pass from Matthew Stafford for the team’s first touchdown. A spectacular TD catch by Calvin Johnson from 17 yards out would put the Lions up 17-0 in the first quarter.
Neither team scored in the second quarter. Oddly enough, it was the only time that’s happened all year across the entire league.
After the break, Prater added to the lead with a 34-yard field goal.
Green Bay would get on the board in an unusual way, with Randall Cobb recovering a James Starks fumble in the end zone for the team’s first touchdown. Davante Adams would add to that later in the quarter, catching an 8-yard Aaron Rodgers pass for a TD and a 20-14 ballgame.
In the fourth, Prater bagged a 42-yard field goal, and Aaron Rodgers ran one in from 17 yards out to make it 23-21.
As time was running out, Rodgers was sacked on what should have been the final play of the game. The Lions were flagged for a facemask on that tackle, however, and the Pack got one more shot with no time left on the clock.
Rodgers heaved a 61-yard Hail Mary pass that was miraculously hauled in by Richard Rodgers for the improbable game-winning TD.
It’s an unfortunate ending for the Lions, who should have swept this season series. Green Bay gets the 27-23 win but has some real issues moving forward.

The Stars: Rodgers kept his team in it when he needed to, finally coming alive in the second half. He’d finish with 273 yards and two scores through the air, with 27 rush yards and a TD. Richard Rodgers was the game’s high receiver (thanks to that last catch) with eight grabs for 146 yards and the score.
On the other side, Stafford was mostly efficient with 220 yards on 23-of-35 passing and two scores. Golden Tate posted eight grabs for 63 yards to lead his team.

The Goats: It’s hard to assign blame here; the game ended on one of those freak occurrences you really can’t script. We could call out DE Devin Taylor for committing the final penalty--one of nine on the evening for 108 yards total from Detroit--but that doesn’t feel quite right. The better team lost here.
The Packers run game was awful; Rodgers was the leading rusher, and the James Starks/Eddie Lacy combo managed 14 carries for only 19 yards between them.
Green Bay also put up a limp 3-of-12 mark on third downs.

Injuries: Even though the got the win, the Packers have a very real problem with injury on their offensive line. Both T.J. Lang and Bryan Bulaga were inactive for this game. On top of that, Corey Linsley and David Bakhtiari left with injuries. That means there’s just one starter left on the OL.

The pick in this article is the opinion of the writer, not a Sports Chat Place site consensus.
Previous Pick
Lions vs. Packers - 12/3/15 NFL Pick, Odds, and Prediction
Next Pick
Top Ten 2015 Week 13 NFL Match-Ups