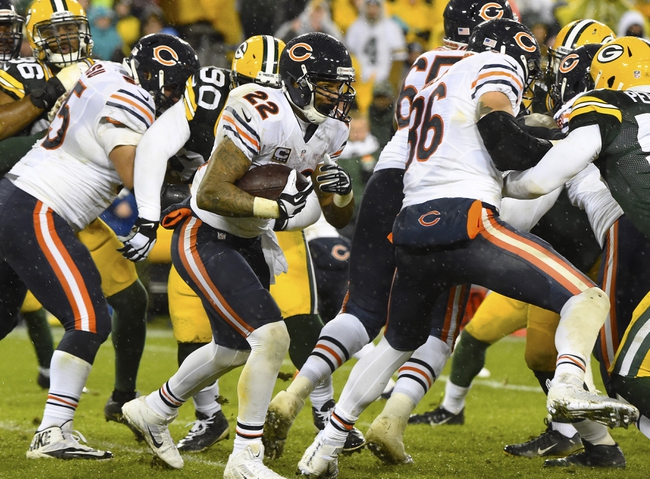 The Chicago Bears and the San Francisco 49ers face off on Sunday at Soldier Field in week 13 NFL action.

The Chicago Bears are 5-6 this season and they are still in the mix for a spot in the playoffs. The Bears offense is averaging 21 points and 346.5 yards per game ad they have a minus one turnover ratio. Chicag QB jay Cutler has completed 63.2 percent of his passes with 14 touchdowns and six interceptions and he has been sacked just 15 times. Matt Forte is healthy and anchoring the Bears rushing attack with 592 yards and two touchdowns and Martellus Bennett is the leading receiver with 50 catches and three touchdowns and Alshon Jeffery has 43 catches and two touchdowns. The Bears defense is allowing 24 points and 343.1 yards per game with six interceptions, 22 sacks, and four fumble recoveries. Christian Jones leads the Chicago defense with 67 tackles, Shea McClellin has 57 tackles, and Pernell McPhee and Lamar Houston have 5.0 sacks each. The Bears are coming off of a Thanksgiving Day win over the Packers and had the extra few days to rest.

The San Francisco 49ers are 3-8 this season as it has become a rebuilding year for the team. The 49ers offense is averaging 13.8 points and 295.5 yards per game both ranking last in the NFL and they are minus three in turnover ratio. Blaine Gabbert has taken over at QB for the Niners and he has completed 65.3 percent of his passes with four touchdowns and three interceptions. Carlos Hyde leads San Francisco in rushing with 470 yards and three touchdowns and Anquan Boldin is the top receiver with 44 catches and two touchdowns. Defensively the 49ers are allowing 24.6 points and 397.9 yards per game with seven interceptions, 19 sacks, and two fumble recoveries. NaVorro Bowman is leading the 49ers with 105 tackles, Michael Wilhoite has 85 tackles, and Aaron Lynch has 6.5 sacks. San Francisco really hasn’t been as bad as their record indicates but they aren’t creating any of their own good luck either.

The bears play in a lot of close games so while I see them winning this three points or less seems to be their wheelhouse.