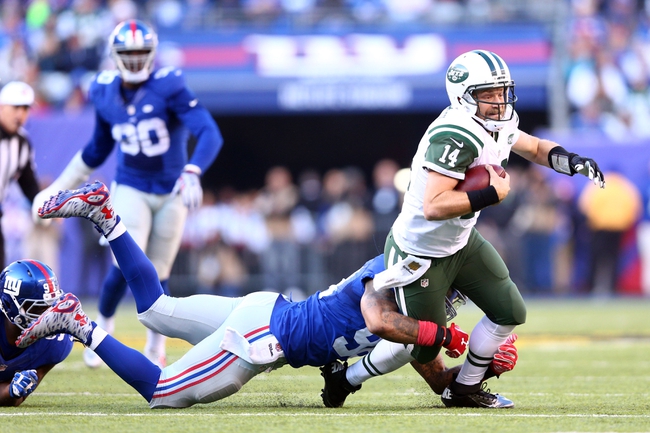 Mixed in with the NFL’s Sunday Week 13 schedule, we had a “Snoopy Bowl” showdown between the Jets and the Giants at MetLife Stadium. The Jets were coming off an impressive win over the Dolphins, while the Giants dropped a divisional game against the Redskins in Week 12. Both teams needed a win here to keep pace in the playoff picture. Adding a little extra drama was the Giants’ domination of this series; the last time the Jets beat them was Halloween of 1993. It took overtime, but the Jets bucked that trend.
Let’s check out some of the key players and stats from the game so we can decipher why things played out the way they did. Afterward we’ll look ahead to Week 14 to see what’s in store for both teams.

What Happened: Neither offense could do much of anything substantial in the first quarter. The only score came on a 24-yard Randy Bullock field goal.
In the second, the Giants stormed back with a great 80-yard punt return TD by Dwayne Harris. After a Chris Ivory fumble, the Giants weren’t able to get into the end zone (they were just inches short) but did come away with a 20-yard Josh Brown field goal.
The Jets offense finally finished off a drive late in the second, with Bilal Powell scoring on a nifty cutback screen play from Ryan Fitzpatrick at the 25-yard line. That tied it up at 10-10, but the Giants fired right back with a 75-yard touchdown pass from Eli Manning to Odell Beckham.
The Jets gave up yet another big play on the next Giants drive, which resulted in a 35-yard Brown field goal. At the break, it was 20-10 Giants.
In the third quarter there was no scoring, but the period ended amid a Giants drive into Jets territory, aided by a penalty call on a punt. The penalties kept flowing on that drive into the fourth, ending on a Manning interception that was returned to the 15 by Rontez Miles. The Jets marched down the field near the Giants goal line but could only muster a 3-point effort on another 24-yard Randy Bullock field goal to cut it to 20-13.
A crucial running into the kicker penalty by the Jets cost them precious field position after a three-and-out stop but they got the ball back at their own 30. The drive went into Giants territory and the Jets tied it up on a Fitzpatrick to Brandon Marshall pass TD from nine yards out and we went to overtime for just the third time ever in meetings between these two teams.
The Jets won the toss and drove down inside the Giants’ 10-yard line. They couldn’t punch it in and had to settle for the field goal from 31 yards out.
The Giants had great field position, overcoming a delay of game penalty by Beckham on fourth down and driving into Jets territory. Brown missed a 48-yard field goal, and the Jets came away with a 23-20 victory and got some long-awaited revenge on their New York brethren.

The Stars: Fitzpatrick had to throw 50 passes but was able to keep his team in the game with 390 yards and two touchdowns. He also had a key scramble on fourth down leading up to Bullock's second field goal. Marshall logged 12 receptions for 131 yards and his TD, while Eric Decker posted eight grabs for 101 yards.
Beckham put up six receptions for 149 yards and his TD on the other side.

The Goats: The Giants couldn’t stop the pass, specifically the underneath screens. Powell caught eight balls for 91 yards and a score. The team also could have kicked a field goal before the Manning interception, but elected to go for it--which obviously didn’t work out too well.
The Jets secondary has been utterly atrocious over the last month and simply looks lost on deep passes. The absence of Darrelle Revis (concussion) is certainly a huge factor.
The Jets’ special teams were horrid in this game as well, allowing the punt-return score and committing some crucial penalties that gave the Giants new life on drives. The Jets offense got just three drives in the entire second half, which shows the effect poor play by the ST/defense can have on the scoreboard.

Injuries: Beckham was shaken up a bit on a near-touchdown late in the second quarter, but seemed to be okay. He would come up limping early in the fourth quarter but shook that off as well.
In the third, Ereck Flowers’ left ankle was injured on the opening drive of the quarter. He looked to be in severe pain afterward and was eventually carted to the locker room.
Robert Ayers came off a short time later, adding to the lengthy list of injuries. His looked like a neck/shoulder issue.
Damontre Moore was hurt tackling Brandon Marshall late in the fourth quarter, and a short time later Jason Pierre-Paul went down on a third-down stop. Moore came back, but was shaken up again a short time later due to asthma symptoms.
The Jets’ Jeremy Kerley came out of the game with a migraine in the fourth.

Outlook: Looking ahead to Week 14, the Jets will be back at MetLife for a game against the incoming Titans (Sunday, December 13; 1:00 PM ET).
Meanwhile, the Giants get a primetime game in Miami on “Monday Night Football” (December 14; 8:30 PM ET on ESPN).

The pick in this article is the opinion of the writer, not a Sports Chat Place site consensus.
Previous Pick
Top Ten 2015 Week 13 NFL Match-Ups
Next Pick
San Diego Chargers vs. Denver Broncos - 12/6/15 NFL Pick, Odds, and Prediction