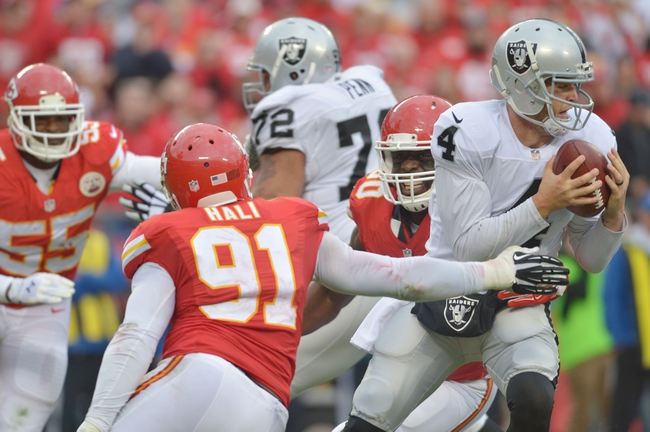 The Oakland Raiders and the Kansas City Chiefs face off on Sunday in Oakland in a NFL Week 13 AFC West match up.

The Oakland Raiders are 5-6 this season and they are still in contention for a playoff spot. The Raiders offense is averaging 24 points and 362.8 yards per game and they are minus one in turnovers. Oakland QB Derek Carr has completed 63.5 percent of his passes with 24 touchdowns and six interceptions. Latavius Murray leads the Raiders rushing attack with 765 yards and four touchdowns and Michael Crabtree is the top receiver with 61 caches and six touchdowns and Amari Cooper has 58 catches and four touchdowns. The Raiders defense is allowing 25.5 points and 391 yards per game with 11 interceptions, 25 sacks, and seven fumble recoveries. Malcolm Smith is the leading tackler for the Raiders with 83, Khalil Mack has seven sacks, and Charles Woodson has five interceptions. The Raiders appear to be putting together a team that will compete over the next several seasons.

The Kansas City Chiefs are 6-5 this season and that is good enough for second place in the AFC West. The Chiefs offense is averaging 26.1 points and 351.3 yards per game and hey are plus 12 in turnovers. Kansas City QB Alex Smith has completed 63.8 percent of his passes with 12 touchdowns and three interceptions. Charcandrick West leads the KC rushing attack with 373 yards and three touchdowns and Jeremy Maclin has 57 catches and three touchdowns. The Chiefs defense is allowing 20 points and 335.4 yards per game with 14 interceptions, 30 sacks, and seven fumble recoveries. Derrick Johnson is Kanss City’s top tackler with 68, Ron Parker has 50 tackles, Justin Houston has 7.5 sacks, and Tamba Hali has 6.5 sacks. The Chiefs don’t beat themselves often and pressure opposing QB’s well.

This is a real rivalry game and I expect it to be a hard fought war. I see the Chiefs as a better team at this point but I like the Raiders in this spot.

The pick in this article is the opinion of the writer, not a Sports Chat Place site consensus.
Previous Pick
New York Jets at New York Giants 12/6/15 NFL Score, Recap, News and Notes
Next Pick
Saints vs. Panthers - 12/6/15 NFL Pick, Odds, and Prediction