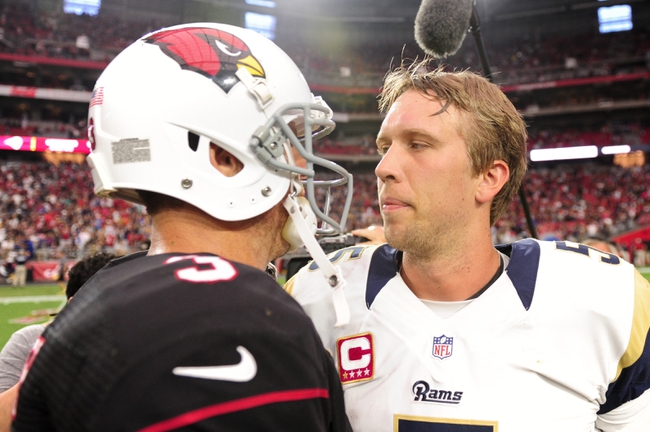 The Arizona Cardinals look for their fifth straight win to inch that much closer to an NFC West title. Carson Palmer is completing 64.2 percent of his passes for 3,066 yards, 27 touchdowns and nine interceptions. Palmer has 11 touchdown passes in his last three games. Larry Fitzgerald and John Brown have combined for 1,531 receiving yards and 11 touchdowns while Michael Floyd has 27 receptions. The Arizona Cardinals ground game is averaging 119.7 yards per contest, and Chris Johnson leads the way with 797 yards and three touchdowns. Defensively, Arizona is allowing 20.8 points and 326.4 yards per game. Deone Bucannon leads the Cardinals with 71 tackles, Dwight Freeney has three sacks and Tyrann Mathieu has 12 pass deflections. Jerraud Powers, Andre Ellington and Chris Johnson are questionable.

The St. Louis Rams are desperate for a victory after losing their last four games. Nick Foles is completing 57.9 percent of his passes for 1,906 yards, seven touchdowns and nine interceptions. Foles has zero touchdown passes in his last three games. Kenny Britt and Jared Cook have combined for 783 receiving yards and one touchdown while Tavon Austin has 37 receptions. The St. Louis Rams ground game is averaging 123.1 yards per contest, and Todd Gurley leads the way with 794 yards and six touchdowns. Defensively, St. Louis is allowing 20.9 points and 341 yards per game. James Laurinaitis leads the Rams with 83 tackles, Aaron Donald has seven sacks and Janoris Jenkins has 13 pass deflections. Andrew Donnal, Robert Quinn and Trumaine Johnson are questionable.

The Rams are a mess right now and don't have the offensive firepower to hang with one of the best and more balanced teams in the NFL. We're talking about a Rams team that's scored no more than 13 points in each of their last three games. I expect the Cardinals to win this game raher easily and cover the resonable number.