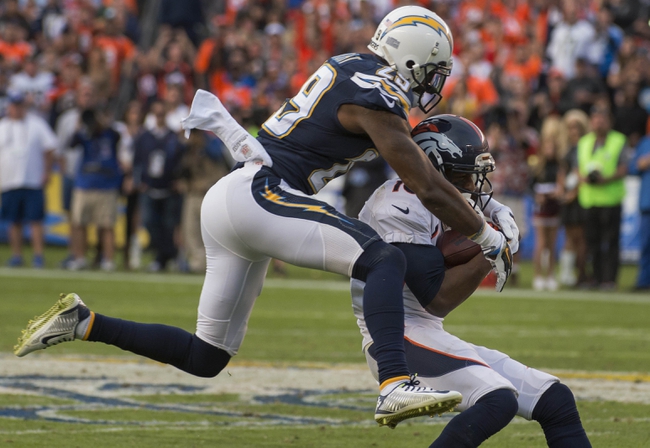 The San Diego Chargers and the Denver Broncos face off on Sunday at Qualcomm Stadium in a NFL Week 13 AFC West match up.

The San Diego Chargers are 3-8 this season but they are coming off of one of their better games of the year beating Jacksonville. The Chargers offense is averaging 22.2 points and 390.5 yards per game and they have a minus six turnover ratio. San Diego QB Phillip Rivers has completed 68.5 percent of his passes with 23 touchdowns and eight interceptions. Melvin Gordon is the Chargers top rusher with 510 yards and Keenan Allen is the top receiver with 67 catches and four touchdowns. The Chargers defense is allowing 27.9 points and 377.6 yards per game wit six interceptions, 21 sacks, and five fumble recoveries. The Chargers have plenty of talent on the roster but they still are just a few pieces short.

The Denver Broncos are 9-2 this season and in first place in the AFC West. The Broncos offense is averaging 22.9 points and 346.1 yards per game and they are net zero in turnovers. Brock Osweiler has taken over for an injured Peyton Manning at QB and he has completed 61.3 percent of his passes with four touchdowns and two interceptions. Ronnie Hillman is the Broncos leading rusher with 587 yards with six touchdowns and Demaryius Thomas leads in receptions with 72. The Broncos defense is allowing 18.8 points and 285.8 yards per game with 10 interceptions, 37 sacks, and 15 fumble recoveries. Brando Marshall leads Denver in tackles with 81, Danny Trevathan has 78 tackles, and Darian Stewart has 57 tackles. The Broncos are coming off of a big Sunday Night win over previously unbeaten New England.

Denver’s win was such a public event the line here is suspiciously low considering how bad the Chargers have been but San Diego is healthy now and I expect them to cover getting this small number.

The pick in this article is the opinion of the writer, not a Sports Chat Place site consensus.
Previous Pick
New York Jets at New York Giants 12/6/15 NFL Score, Recap, News and Notes
Next Pick
Saints vs. Panthers - 12/6/15 NFL Pick, Odds, and Prediction