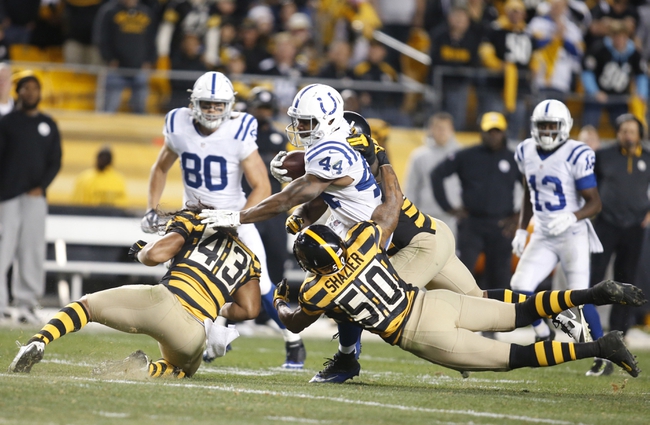 The Indianapolis Colts and Pittsburgh Steelers square off in a AFC battle Sunday night at Heinz Field.

The Indianapolis Colts look for their fourth straight victory to keep their lead in the AFC South. Matt Hasselbeck is completing 64.7 percent of his passes for 1,023 yards, seven touchdowns and two interceptions. Hasselbeck has six touchdown passes in his last three games. T.Y. Hilton and Donte Moncrief have combined for 1,403 receiving yards and 10 touchdowns while Coby Fleener has 39 receptions. The Indianapolis Colts ground game is averaging 92 yards per contest, and Frank Gore leads the way with 657 yards and four touchdowns. Defensively, Indianapolis is allowing 23.6 points and 387.9 yards per game. D'Qwell Jackson leads the Colts with 111 tackles, Vontae Davis has 12 pass deflections and Robert Mathis has four sacks. Anthony Castonzo, Mike Adams and Phillip Dorsett are questionable.

The Pittsburgh Steelers look for a win to stay in the playoff race after splitting their last eight games. Ben Roethlisberger is completing 66.5 percent of his passes for 2,343 yards, 11 touchdowns and nine interceptions. Roethlisberger is questionable for this game with a concussion. Antonio Brown and Martavis Bryant have combined for 1,701 receiving yards and 10 touchdowns while Markus Wheaton has 25 receptions. The Pittsburgh Steelers ground game is averaging 119.9 yards per contest, and DeAngelo Williams leads the way with 563 yards and six touchdowns. Defensively, Pittsburgh is allowing 20.9 points and 377.3 yards per game. Lawrence Timmons leads the Steelers with 80 tackles, Cameron Heyward has five sacks and Antwon Blake has nine pass deflections. Heath Miller and Ryan Shazier are questionable.

The Colts hae found their groove a bit and are gaining confidence as we head down the home stretch. While the Steelers are the better team, I can't bring myself to lay a touchdown with a Pittsburgh team that has a banged up quarterback and has been so inconsistent all year long.

The pick in this article is the opinion of the writer, not a Sports Chat Place site consensus.
Previous Pick
Saints vs. Panthers - 12/6/15 NFL Pick, Odds, and Prediction
Next Pick
Indianapolis Colts at Pittsburgh Steelers NFL Score, Recap, News and Notes