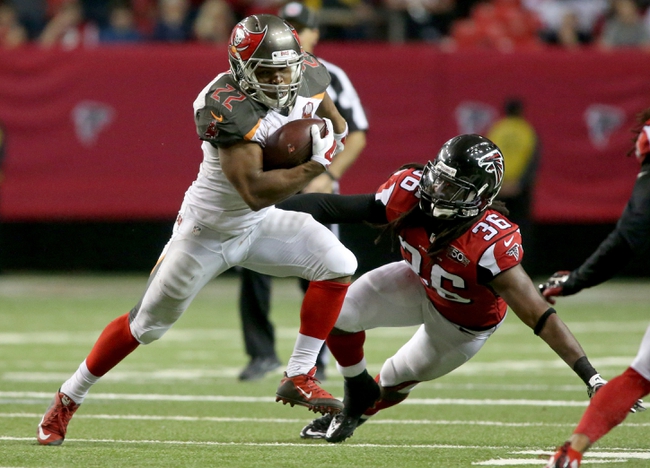 The Tampa Bay Buccaneers and the Atlanta Falcons face off on Sunday in a NFL Week 13 NFC South match up.

The Tampa Bay Buccaneers are 5-6 this season and despite a tough loss at Indy last week they are still hopeful they can earn a playoff spot. The Buccaneers offense is averaging 22.5 points and 368.3 yards per game and they have a plus two turnover ratio. Bucs rookie QB Jameis Winston has completed 58 percent of his passes with 16 touchdowns and 10 interceptions and he has rushed for four touchdowns. Doug Martin leads the Tampa Bay rushing attack with 1,038 yards and three touchdowns and Mike Evans is the leading receiver with 49 catches and two touchdowns. The Buccaneers defense is allowing 25.4 points and 338.8 yards per game with 10 interceptions, 26 sacks, and 16 fumble recoveries. The Bucs appear to be ahead of schedule as far as rebuilding.

The Atlanta Falcons are 6-5 this season but they are sinking fast after a hot start. The Falcons offense is averaging 23.6 points and 392.8 yards per game with a minus three turnover ratio. Devonta Freeman leads the Falcons rushing game wth 764 yards and nine touchdowns but he has been banged up allowing more time for Tevin Coleman who has been effective while Julio Jones as 94 receptions and six touchdowns. Defensively the Falcons are allowing 21.3 points and 338.4 yards per game with 13 interceptions, 12 sacks, and seven fumble recoveries. Paul Worrilow has 70 tackles, Justin Durant has 51 tackles, and Ricardo Allen and William Moore have 47 tackles each. The Falcons red zone offense has been abysmal including turning the ball over deep into drives.

I don’t like the way the Falcons are spiraling and the Bucs look to be getting better so Tampa Bay is my pick here.