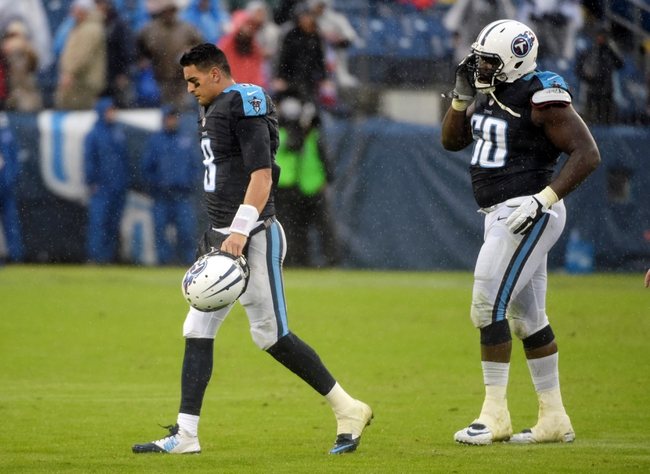 The Jacksonville Jaguars and Tennessee Titans meet Sunday in a AFC South matchup at Nissan Stadium.

The Jacksonville Jaguars look for their second road victory after splitting their last six games. Blake Bortles is completing 57 percent of his passes for 2,952 yards, 22 touchdowns and 13 interceptions. Bortles has five passing touchdowns in his last three games. Allen Robinson and Bryan Walters have combined for 1,277 receiving yards and nine touchdowns while Julius Thomas has 29 receptions. The Jacksonville Jaguars ground game is averaging 96 yards per contest, and T.J. Yeldon leads the way with 621 yards and one touchdown. Defensively, Jacksonville is allowing 27.2 points and 358.5 yards per game. Telvin Smith leads the Jaguars with 104 tackles, Aaron Colvin has four sacks and Davon House has 17 pass deflections. Josh Evans and Bernard Pierce are questionable while Allen Hurns is doubtful.

The Tennessee Titans look for their first home victory since October of 2014 against Jacksonville. Marcus Mariota is completing 62.8 percent of his passes for 2,244 yards, 16 touchdowns and eight interceptions. Mariota has three passing touchdowns in his last three games. Delanie Walker and Kendall Wright have combined for 1,070 receiving yards and six touchdowns while Justin Hunter has 22 receptions. The Tennessee Titans ground game is averaging 93.2 yards per contest, and Antonio Andrews leads the way with 408 yards and two touchdowns. Defensively, Tennessee is allowing 23.4 points and 331.8 yards per game. Avery Williamson leads the Titans with 68 tackles, Brian Orakpo has seven sacks and Coty Sensabaugh has six pass deflections. Al Woods and Derrick Morgan are questionable.

The Titans season may be over, but they continue to compete and are desprate to get their first home victory in more than a year. It's only fitting that victory comes against the same Jags team that was their last home win. Jacksonville isn't exactly a world beater, and gives Tennessee the perfect chance to end the skid.

I'll side with the home team and the reasonable chalk.