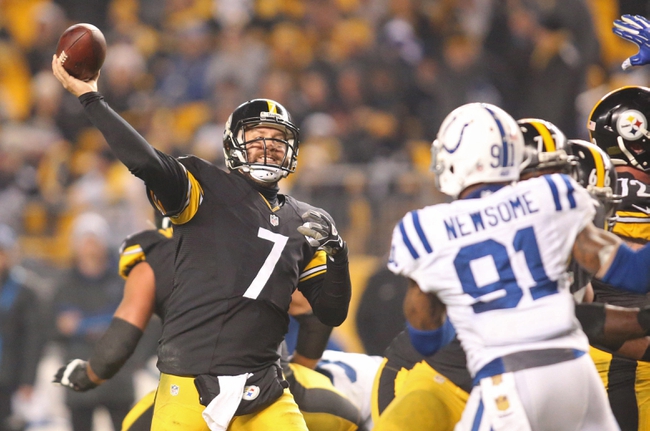 In the Week 13 edition of “Sunday Night Football,” the NFL gave us a nice-looking AFC matchup between the Colts and the Steelers. Indianapolis was coming off a solid win over the Buccaneers in their last appearance, while Pittsburgh dropped a game to the Seahawks in Week 12. Games between these two teams are usually pretty good, but the Steelers had little trouble here in a blowout.
Let’s take a closer look at some of the key players and stats from this game so we can figure out why things played out the way they did. Afterward we’ll look ahead to Week 14 to see what’s in store for both teams.

What Happened: The Steelers started out pretty slowly, and the Colts had the edge in the early-going. Indy would start things out on a 35-yard Adam Vinatieri field goal. Pittsburgh responded in the form of a pair of Chris Boswell field goals from 29 and 51 yards to make it 6-3 Steelers after one.
The Colts actually retook the lead early in the second, with Matt Hasselbeck finding Frank Gore on a 9-yard TD pass. It was the last time the Colts would see the lead--or the scoreboard at all.
The Steelers onslaught began on a 7-yard Antonio Brown pass from Ben Roethlisberger. The team closed out the half on a Roethlisberger to Markus Wheaton hookup from five yards out. At the break, it was 21-10 Pittsburgh.
After the teams emerged from the locker room, Martavis Bryant posted a 68-yard score on a Roethlisberger pass to extend the lead. It would be the only score of the quarter.
In the fourth, Antonio Brown was the star. He scored on a 5-yard TD pass from Roethlisberger, then again on a 71-yard punt return following a Boswell field goal from 42 yards.
That punt return put the stamp on a dominant night by a Steelers team right in the mix of the playoff hunt and looking good moving forward. They dominated this one 45-10 to move to 7-5 on the year. The Colts fall to 6-6.

The Stars: Roethlisberger was great once again in this one, throwing four touchdowns and 364 yards. He now has a whopping 10 touchdowns in the last two meetings of these teams. Brown (eight receptions; 118 yards; two TD) and Bryant (four receptions; 114 yards; TD) were the main targets. DeAngelo Williams had 134 yards on 26 carries and another 31 on five receptions.
On the other side, there’s not much to be happy about. Gore had 94 total yards and the TD--and actually led the team in receiving.

The Goats: Hasselbeck looked pretty mortal here after a nice run replacing the injured Andrew Luck. He threw for just 169 yards here, one TD and two picks. He also lost a fumble. T.Y. Hilton (three receptions; 36 yards), Andre Johnson (two receptions; 44 yards) and Donte Moncrief (one reception; 33 yards) were nowhere to be found.
The Colts were just 4-of-17 on third and fourth down, with a paltry 54 net yards rushing. Their defense could do nothing to slow the Steelers, who were 8-of-13 on third downs and posted 522 net yards.

Injuries: The aging Hasselbeck left the game in the fourth quarter due to neck and shoulder pain. He seemed pretty unsure after the game when asked about starting next week.

Outlook: Looking ahead to the NFL’s Week 14, both teams will be back in action on Sunday, December 13 at 1:00 PM ET on CBS. The Colts will head down to Jacksonville to see the Jaguars, while the Steelers will also have a divisional road game in Cincinnati against the Bengals.