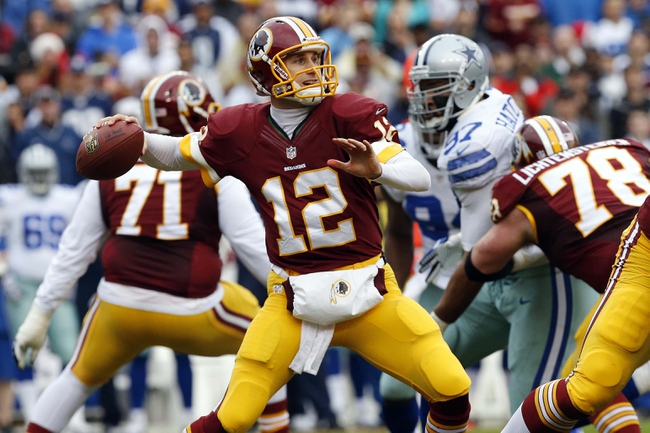 The Dallas Cowboys must win out to have any real shot of sneaking into the playoffs by winning the NFC East. Matt Cassel is completing 63 percent of his passes for 902 yards, five touchdowns and five interceptions. Cassel has four touchdown passes in his last three games. Jason Witten and Terrance Williams have combined for 999 receiving yards and five touchdowns while Cole Beasley has 39 receptions. The Dallas Cowboys ground game is averaging 115.3 yards per contest, and Darren McFadden leads the way with 634 yards and two touchdowns. Defensively, Dallas is allowing 23.7 points and 332 yards per game. Sean Lee leads the Cowboys with 81 tackles, Byron Jones has eight pass deflections and Greg Hardy has 4.5 sacks. Morris Claiborne, Brice Butler and Ryan Russell are questionable.

The Washington Redskins can inch closer to an NFC East division title with a big victory here. Kirk Cousins is completing 68.4 percent of his passes for 2,787 yards, 16 touchdowns and 10 interceptions. Cousins has six touchdown passes in his last three games. Jordan Reed and Pierre Garcon have combined for 1,049 receiving yards and nine touchdowns while Jamison Crowder has 45 receptions. The Washington Redskins ground game is averaging 96.2 yards per contest, and Alfred Morris leads the way with 482 yards on 135 carries. Defensively, Washington is allowing 26.7 points and 370.1 yards per game. Dashon Goldson leads the Redskins with 86 tackles, Ryan Kerrigan has 6.5 sacks and Bashaud Breeland has 12 pass deflections. Deshazor Everett, Keenan Robinson and Derek Carrier are questionable.

I've been saying for a while that the Redskins weren't as bad as people thought. Well, what do you know? Anyway, the Cowboys are all banged up and we've seen this Cassel movie before. Also, the Redskins have won five straight games on their home field.

Washington has to be the pick here based on the injury to Romo and the way the Redskins have been playing on their home field all season.

The pick in this article is the opinion of the writer, not a Sports Chat Place site consensus.
Previous Pick
Vikings vs. Seahawks - 12/6/15 NFL Pick, Odds, and Prediction
Next Pick
Top Ten Takeaways From Week 13 in the NFL