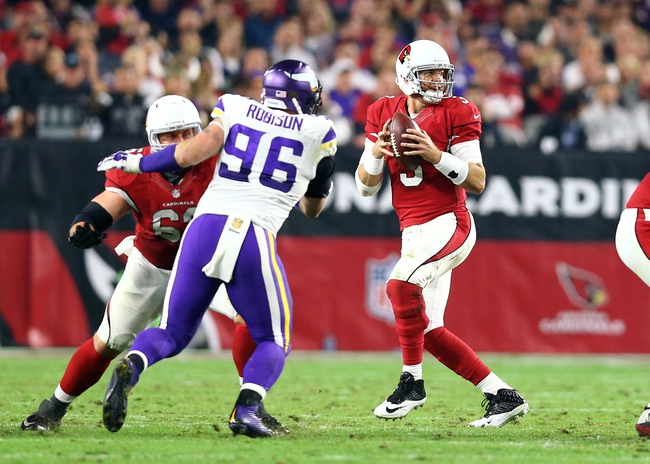 Kicking off the NFL’s Week 14 schedule on “Thursday Night Football,” we had a great-looking NFC battle between the Vikings and the Cardinals. Minnesota was demolished by the Seahawks in their last appearance, while Arizona tallied another win against the Rams in Week 13. This was a big game as far as the conference playoff picture goes, and both teams wanted to gain some ground.
Let’s check out a few of the notable players and stats from this one so we can figure out why things played out the way they did. Afterward we’ll look ahead to Week 15 to see what’s in store for both teams.

What Happened: Chandler Catanzaro got the scoring started off for the Cardinals in the first quarter with a 27-yard field goal. Adrian Peterson put the Vikings on the board with a 9-yard run a short time later, but the Cards were back on top with a 65-yard TD hookup between Carson Palmer and Josh Brown. After one, it was 10-7 Arizona.
The only scoring of the second quarter came on a 44-yard Blair Walsh field goal, which tied it up at 10 going into the half.
After the break, the Cardinals were able to get back on top with a 42-yard TD pass from Palmer to Michael Floyd. That would stand as the only score of the quarter, and a 17-10 Arizona lead.
Catanzaro extended the margin with a 23-yarder in the fourth, but then the Vikings stormed back. Walsh nailed a 54-yard field goal, and Mike Wallace came up with a 7-yard TD pass from Teddy Bridgewater.
We were all tied up until a Catanzaro 47-yard field goal gave the Cards the 23-20 edge. Minnesota had one last chance to tie--and they were in field goal range--but Bridgewater lost the ball on a strip sack, securing the 23-20 victory for Arizona.
The Cardinals secure a playoff berth with the win. They move to 11-2 on the year. The Vikings are 8-5.

The Goats: The Vikings’ loss simply comes down to turnovers. The team lost three fumbles, which directly led to Cardinals points. Adrian Peterson got his wish for more carries, but could only come up with 69 yards on 23 totes. He had a long of 21 and didn’t do much after the first quarter.

Injuries: Vikings CB Xavier Rhodes appeared to injure his right forearm on a tackle during the second quarter. Fortunately for a depleted Minnesota secondary, he was able to come back into the game.

Outlook: Looking ahead to Week 15, both teams will be back in action on Sunday, December 20. The Vikings will host the Bears (1:00 PM ET on FOX), while the Cardinals get another primetime game on the road against the Eagles (8:30 PM ET on NBC).

The pick in this article is the opinion of the writer, not a Sports Chat Place site consensus.
Previous Pick
Cardinals vs. Vikings - 12/10/15 NFL Pick, Odds, and Prediction
Next Pick
Top Five Best Week 14 NFL Bets