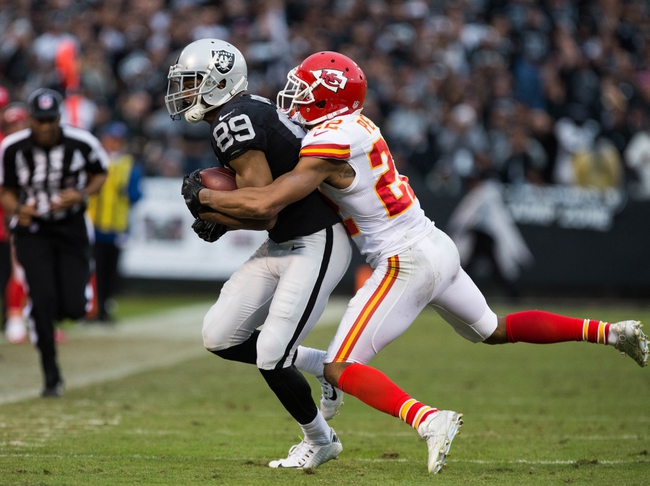 The NFL’s Week 14 is officially underway, and we’ve got plenty to talk about this morning. Let’s take our daily look at the headlines and see which players are in the news right now.

Vikings-Cardinals Wrap-Up: The Cardinals clinched a playoff berth last night on “Thursday Night Football” against the Vikings, taking a razor-close 23-20 win.
35-year-old Dwight Freeney stripped Vikes QB Teddy Bridgewater on the final play of the game, securing the turnover and the victory.
Carson Palmer played well, posting 310 yards and a pair of touchdowns.
The Cardinals will secure the NFC West if the Seahawks lose to the Ravens on Sunday.

Torrey Smith wasn’t able to practice yesterday. He’s dealing with injuries to his back and toe.
It’s likely the Niners are simply keeping him fresh for Week 14, so we’d imagine he’ll be okay for Sunday.

Amari Cooper was limited in the Raiders’ practice session yesterday, thanks to a foot injury.
This is a new issue for Cooper, and bad news taken at face value. It’ll be interesting to see what he does at today’s practice. Regardless, he’s got a very tough matchup Sunday against the Broncos. They’re the league’s best defense.

Gary Barnidge of the Browns was still limited in practice yesterday. He’s fighting off an ankle injury.
Even with the injury, Barnidge should still play on Sunday. The big question will be his chemistry with Johnny Manziel, which could depict a bit of the Browns’ future.

In other TE news, the Steelers’ Heath Miller was able to return to practice yesterday. He was limited.
Miller should be good to go for Week 14, even though he’s nursing a rib injury. He missed out on last week’s game.

Good news for the Chargers: QB Philip Rivers was able to practice in full yesterday.
Rivers put in a limited session Wednesday, so the upgrade bodes well for his Week 14 availability. The bad news is that he’s hurting for receivers and facing a rough Chiefs pass D this Sunday.

The pick in this article is the opinion of the writer, not a Sports Chat Place site consensus.
Previous Pick
Cardinals vs. Vikings - 12/10/15 NFL Pick, Odds, and Prediction
Next Pick
Top Five Best Week 14 NFL Bets