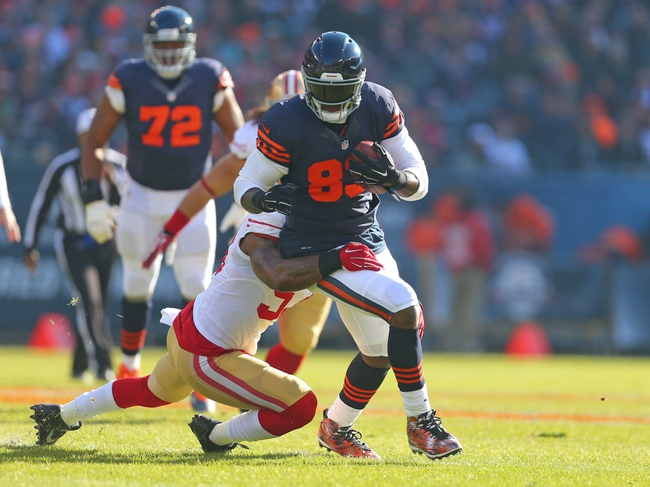 The Chicago Bears and the Washington Redskins face off on Sunday at Soldier Field in a NFL week 14 battle of teams who took devastating losses in week 13.

The Chicago Bears appeared to be in playoff contention in the NFC but their overtime loss last week to the 49ers could be too much of a setback to overcome. The Bears offense is averaging 20.9 points and 347.9 yards per game and they have a minus two turnover ratio.  Chicago QB Jay Cutler has completed 62.7 percent of his passes with 14 touchdowns and seven interceptions. Matt Forte leads the Bears ground attach with 676 yards and three touchdowns and Martellus Bennett leads in receptions with 53 and Alshon Jeffery has 47. The Bears defense is allowing 24.2 points and 338.8 yards per game with six interceptions, 26 sacks, and four fumble recoveries. Christian Jones leads the Bears with 69 tackles, Shea McClellin has 66 tackles, and Adrian Amos has 51 tackles. The Bears probably need to win out to have any chance of making the playoffs.

The Washington Redskins had a chance to take the lead in the NFC East but they let it slip away losing at home to the Cowboys on Monday Night Football. The Redskins are averaging 21.4 points and 333.4 yards per game and they have a net zero turnover ratio. Kirk Cousins is firmly implanted as the Washington QB completing 68.6 percent of his passes with 17 touchdowns and 10 interceptions. Alfred Morris is the Redskins top rusher with 494 yards and Jordan Reed is the top pass catcher with 58 and Pierre Garcon has 54. The Redskins defense is allowing 23.8 points and 362.5 yards per game with nne interceptions, 21 sacks, and 16 fumble recoveries. Dashon Goldson leads the Redskins with 92 tackles, Will Compton has 71 tackles, and Bashaud Breeland has 64 tackles. The Redskins are still alive I the NFC East where .500 should win the division.

These two lay tight games in general so getting better than three points the play is to take the points with the Redskins.