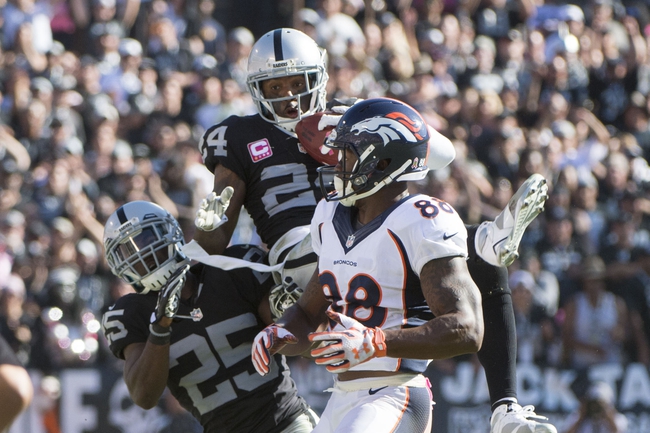 The Denver Broncos and the Oakland Raiders face off on Sunday in a Week 14 NFL battle of AFC West teams.

The Denver Broncos are 10-2 this season and are looking for home field advantage in the playoffs. The Colts offense is averaging 22.4 points and 341.7 yards per game and they have a plus two turnover ratio. Brock Osweiler has taken over as the Denver QB for the injured Peyton manning and he has completed 61.3 percent of his passes with five touchdowns and three interceptions. Ronnie Hillman is the Broncos leading rusher with 643 yards and six touchdowns and Demaryius Thomas is the top receiver with 78 catches and three touchdowns. The Broncos defense is allowing 17.5 points and 284.7 yards per game with 11 interceptions, 41 sacks, and 19 fumble recoveries. Brandon Marshall is leads Denver in tackles with 84, Danny Trevathan has 80 tackles, and T.J. Ward has 57 tackles. The Broncos defense has been carrying the day for the offense.

The Oakland Raiders are 5-7 this season and they have watched their playoff hopes slide away. The Raiders offense is averaging 23.7 points and 362.7 yards per game and they are minus two in turnover ratio. Oakland QB Derek Carr has completed 63.6 percent of his passes with 26 touchdowns and nine interceptions. Latavius Murray is the Raiders top rusher with 851 yards and five touchdowns and Michael Crabtree has 66 catches and seven touchdowns. The Raiders defense is allowing 26.2 points and 377.8 yards per game with 11 interceptions, 29 sacks, and nine fumble recoveries. Malcolm Smith leads the Raiders defense with 86 tackles, Charles Woodson has 60 tackles, and D.J. Hayden has 58 tackles. The Raiders need to win out to have any chance at all of making the playoffs.

The Broncos defense has been carrying them but this one is likely a battle and I just see it being closer than the number so my play is the Raiders with the points.

The pick in this article is the opinion of the writer, not a Sports Chat Place site consensus.
Previous Pick
Top Five Best Week 14 NFL Bets
Next Pick
Packers vs. Cowboys - 12/13/15 NFL Pick, Odds, and Prediction