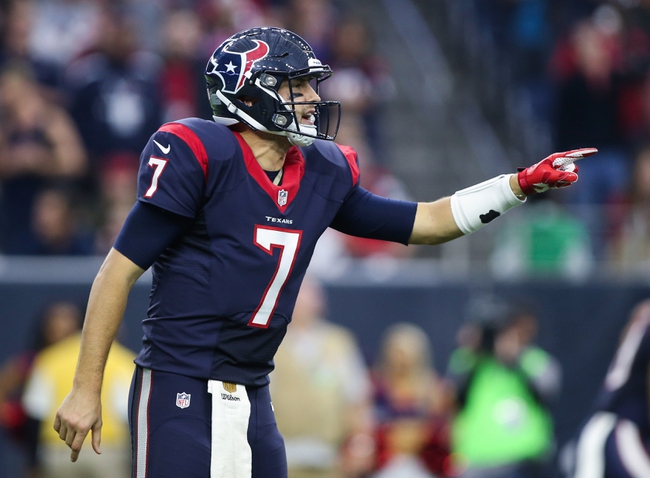 The New England Patriots have not lost three straight regular season games since the 2002 season. Tom Brady is completing 63.7 percent of his passes for 3,912 yards, 31 touchdowns and six interceptions. Brady has seven touchdown passes in his last three games. Rob Gronkowski and Danny Amendola have combined for 1,513 receiving yards and 12 touchdowns while Brandon LaFell has 25 receptions. The New England Patriots ground game is averaging 88.5 yards per contest, and LeGarrette Blount leads the way with 650 yards and six touchdowns. Defensively, New England is allowing 20.6 points and 341.2 yards per game. Patrick Chung leads the Patriots with 64 tackles, Chandler Jones has 10.5 sacks and Logan Ryan has 12 pass deflections. Rob Gronkowski, Justin Coleman and Dominique Easley are questionable.

The Houston Texans look to get a game above .500 and remain in the AFC playoff race. Brian Hoyer is completing 61.2 percent of his passes for 2,202 yards, 18 touchdowns and six interceptions. Hoyer has five touchdown passes in his last two games. DeAndre Hopkins and Nate Washington have combined for 1,712 receiving yards and 13 touchdowns while Cecil Shorts III has 40 receptions. The Houston Texans ground game is averaging 100.1 yards per contest, and Alfred Blue leads the way with 444 yards and two touchdowns. Defensively, Houston is allowing 22 points and 332.3 yards per game. Brian Cushing leads the Texans with 87 tackles, J.J. Watt has 13.5 sacks and Johnathan Joseph has 16 pass deflections. Brandon Brooks is questionable with an illness.

The points and the home team during primetime is very inviting considering just how banged up the Pats are. However, the Patriots haven't lost three straight games in over a decade. That's very tough to bet against, especially if New England can get a few guys back for this contest.

Regardless, I'll take my chances with New England and the low chalk, as history is on our side here.

The pick in this article is the opinion of the writer, not a Sports Chat Place site consensus.
Previous Pick
Packers vs. Cowboys - 12/13/15 NFL Pick, Odds, and Prediction
Next Pick
New England Patriots at Houston Texans 12/13/15 NFL Score, Recap, News and Notes