Top Ten Takeaways From Week 14 in the NFL 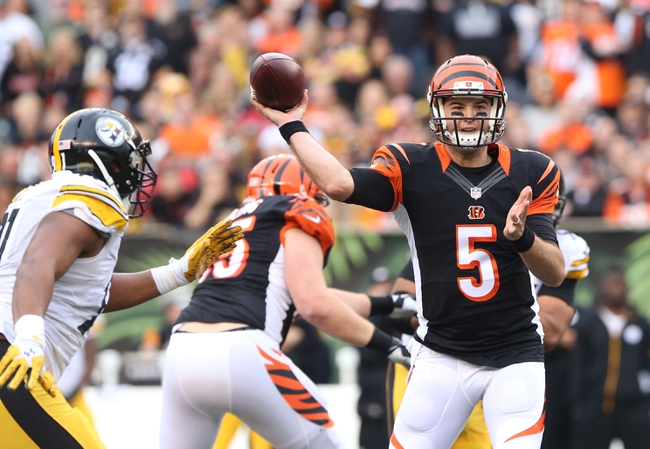 For two weeks running, it’s been rough to be a Colts fan on Monday morning. I think I’m starting to understand how the Dawg Pound feels year in and year out. Bless y’all in Cleveland. I’m going to try to power through my woes, though, and bring you the top ten takeaways from Week 14 in the NFL.

1. The Bengals might have to wait another two-and-a-half decades for a playoff win.

Not to be alarmist and not to lack faith in the back-up who shares my alma mater, but depending on just how bad Andy Dalton’s broken thumb is, the Bengals might have found their incredible season ending before the playoffs even begin. AJ McCarron threw a pick-six almost immediately after taking the field yesterday afternoon. Not what Cincy fans wanted to see. If Dalton doesn’t return to form before the playoffs, this could quickly turn into a repeat of every other year in the Queen City. At least it was fun while it lasted.

2. Khalil Mack is an absolute beast.

…talk about Beastmode. During Oakland’s shocking win at Denver yesterday, Mack tallied five sacks on Brock Osweiler, setting a franchise record. That (combined with a couple of useful turnovers) certainly sealed the W for the Raiders. Otherwise, the stats were strangely in the Broncos’ favor. Oakland had only 126 yards and eight first downs compared to Denver’s 300 yards and 20 first downs. Numbers never lie, but they do say there’s an exception to every rule…I’d say this is it.

3. The Colts have to focus on depth at every position.

The Colts were Super Bowl favorites heading into the 2015 season. Now, injury laden and lacking any sort of depth whatsoever, they’re fighting to keep a division crown they’ve held onto every year since 2011. Yesterday’s rout by Jacksonville made it painfully clear that the team’s front office must focus on depth this offseason. D’Qwell Jackson and Vontae Davis do not a defense make when they’re surrounded by lackluster back-ups. On the bright side, Jaguars fans learned how it feels to score 42 points in a single half…

4. The Steelers could manage to win the AFC North.

This is, albeit, unlikely, but the team that was starting Jarvis Landry at quarterback at one point this year could actually win its division. If AJ McCarron can’t keep the SS Cincinnati afloat, Big Ben and Co. have the opportunity to swoop in and take the AFC North at the eleventh hour. They’re currently two games back and have the Broncos (at home), Ravens, and Browns (a couple of presumably easy wins) to go.

5. Russell Wilson is looking better than ever.

The Seahawks are looking like a Super Bowl team again at just the right point in the season. Wilson threw five touchdowns in yesterday’s 35-6 rout of the Ravens, bringing his four-week total to 16 touchdown passes and zero interceptions. Doug Baldwin has become the quarterback’s favorite target. If this keeps-up, Pete Carroll and his team could find themselves taking a trip to Santa Clara in February.

6. Jim Tomsula should be out of a job.

I’m not one to call for first-year head coaches to be fired, but this is an extenuating circumstance. When your team allows 481 yards, nine sacks, and loses by two touchdowns to a two-win Browns club (led, no less, by the debacle that is Johnny Manziel), you should receive Black Monday’s first phone call. Anyone in San Fran looking for a job? I’m thinking there are fans that could manage to do better than this.

7. Everything is going the Patriots’ way.

Bill Belichick and Co. needed a couple of things to happen to help them out after their two game slide: Rob Gronkowski’s return and a Denver Broncos loss. They got both of them yesterday. Denver was fully expected to beat the Raiders and Gronk should still be writhing in pain somewhere with a torn ACL. Instead, Khallil Mack happened and #87 was back on the field committing uncalled offensive pass interference left and right. It would seem the football gods are once again smiling on New England.

Gould is the most accurate kicker in Bears history. This season, though, he’s missed six field goal attempts, including one that could have forced overtime against the Redskins yesterday. That’s the second week in a row Gould has missed a critical score.

9. The Carolina Panthers are the worst undefeated team in NFL history.

I’m not just saying this because I’m bitter over Week 8. Using the Elo scale through Week 11, this Carolina team is quite good, but not as good as any other team that has started 11-0 in the Super Bowl Era. Their Elo rating, as a matter of fact, is 1689, which is a full 23 points behind the 1972 Dolphins’ next-closest 1712 score. Yesterday, Cam Newton and Co. shutout an Atlanta team that has now dropped six in a row. That’s not really much of an accomplishment when you stop to think about it…

10. This year’s NFL leaves much to be desired.

I’m a big fan of the phrase “Any given Sunday” and I love to see the underdog take a win every now and then. I also live and breathe the game of football. All of that said, this year’s NFL has provided fans with a mediocre product all season long. From horrible officiating (I’m still wondering where the 18 seconds went earlier this year…) to pathetic performances by some of the league’s best teams (I’m looking at you, early season Seahawks…), things have been a mess. As we head into Week 15, all but 10 teams still have a legitimate shot at making the postseason. That’s the definition of middling, folks.

The pick in this article is the opinion of the writer, not a Sports Chat Place site consensus.
Previous Pick
Dolphins vs. Giants - 12/14/15 NFL Pick, Odds, and Prediction
Next Pick
Top Ten Worst 2015 NFL Week 14 Injuries