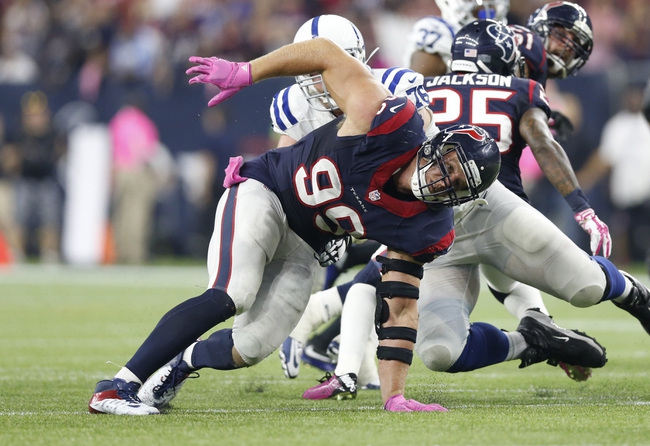 The Houston Texans hope for a win to get back to a .500 record and remain in the playoff race. T.J. Yates is completing 46.8 percent of his passes for 302 yards, three touchdowns and zero interceptions. Yates has 51 pass attempts since the 2014 season. DeAndre Hopkins and Nate Washington have combined for 1,813 receiving yards and 13 touchdowns while Cecil Shorts III has 42 receptions. The Houston Texans ground game is averaging 99.1 yards per contest, and Alfred Blue leads the way with 444 yards and two touchdowns. Defensively, Houston is allowing 22.4 points and 330.8 yards per game. Brian Cushing leads the Texans with 96 tackles, J.J. Watt has 13.5 sacks and Johnathan Joseph has 17 pass deflections. Brian Hoyer is doubtful with a head injury.

The Indianapolis Colts hope to get back on top of the AFC South with a big home victory. Charlie Whitehurst is completing 37.5 percent of his passes for 59 yards, zero touchdowns and one interception. Whitehurst has 201 pass attempts since the 2014 season. T.Y. Hilton and Donte Moncrief have combined for 1,656 receiving yards and 10 touchdowns while Andre Johnson has 31 receptions. The Indianapolis Colts ground game is averaging 89.3 yards per contest, and Frank Gore leads the way with 762 yards and four touchdowns. Defensively, Indianapolis is allowing 27.4 points and 397.6 yards per game. D'Qwell Jackson leads the Colts with 129 tackles, Vontae Davis has 13 pass deflections and Dwight Lowery has four interceptions. Matt Hasselbeck, Andrew Luck and Erik Walden are questionable.

The Colts have no trouble beating their division, it's the other teams you have to worry about. In a toss-up matchup, I'm going to side with the home team that's owned the Titans, Jags and Texans over the years.