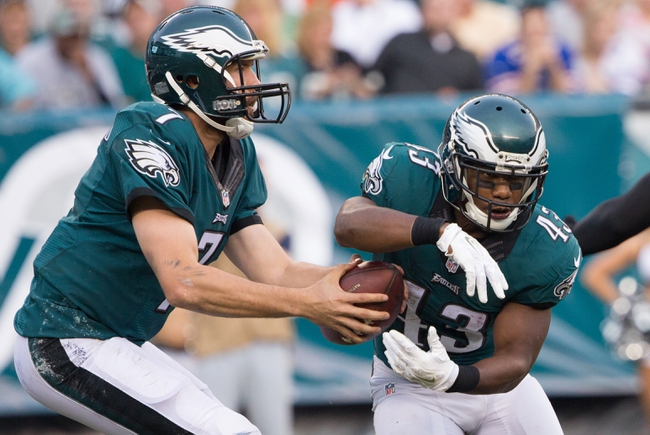 The Arizona Cardinals look to lockup the NFC West with a big road victory here. Carson Palmer is completing 64.5 percent of his passes for 4,003 yards, 31 touchdowns and nine interceptions. Palmer has eight touchdown passes in his last four games. Larry Fitzgerald and John Brown have combined for 1,983 receiving yards and 12 touchdowns while Michael Floyd has 40 receptions. The Arizona Cardinals ground game is averaging 118.4 yards per contest, and Chris Johnson leads the way with 814 yards and three touchdowns. Defensively, Arizona is allowing 19.4 points and 322.4 yards per game. Deone Bucannon leads the Cardinals with 88 tackles, Tyrann Mathieu has 15 pass deflections and Rashad Johnson has five interceptions. Andre Ellington, Frostee Rucker and Jermaine Gresham are questionable.

The Philadelphia Eagles hope to get back to a .500 record and stay in the NFC East race. Sam Bradford is completing 63.2 percent of his passes for 2,664 yards, 14 touchdowns and 11 interceptions. Bradford has four passing touchdowns in his last three games. Jordan Matthews and Zach Ertz have combined for 1,181 receiving yards and five touchdowns while Brent Celek has 22 receptions. The Philadelphia Eagles ground game is averaging 115.7 yards per contest, and DeMarco Murray leads the way with 603 yards and four touchdowns. Defensively, Philadelphia is allowing 24.8 points and 385.6 yards per game. Malcolm Jenkins leads the Eagles with 87 tackles, Nolan Carroll II has 10 pass deflections and Fletcher Cox has 6.5 sacks.

I'm still not jumping on that Eagles bandwagon, as the offense is still suspect and the secondary allows too many big passing plays. The Cardinals in my eyes are the best team in the NFC. The Cards pressure defense is sure to force Bradford into mistakes and Palmer & that offense is going to give Philly trouble as well. Not to mention Arizona has had a mini bye week to prepare for this game.

While the points and the home team are interesting, I see the Cardinals winning this game and covering the reasonable number.

The pick in this article is the opinion of the writer, not a Sports Chat Place site consensus.
Previous Pick
Steelers vs. Broncos - 12/20/15 NFL Pick, Odds, and Prediction
Next Pick
Arizona Cardinals at Philadelphia Eagles 12/20/15 NFL Score, Recap, News and Notes