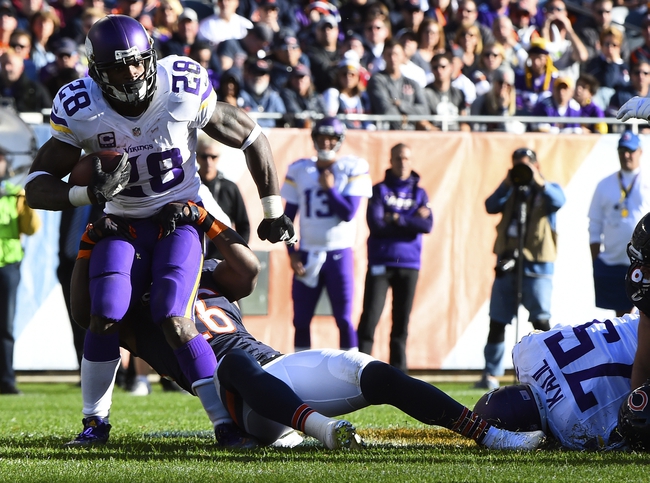 The Minnesota Vikings and the Chicago Bears face off Sunday in Minnesota in Week 15 NFL football.

The Minnesota Vikings are 8-5 this season and they are looking to bounce back from back-to-back losses. The Vikings offense is averaging 19.8 points and 321.5 yards per game with a net zero turnover ratio. Minnesota QB Teddy Bridgewater has completed 65.3 percent of his passes with nine touchdowns and eight interceptions. Adrian Peterson is still the best running back in the NFL with 1,251 yards and nine touchdowns and Kyle Rudolph leads the Vikings in receptions with 45 and four touchdowns and Stefon Diggs has 44 catches. The Vikings defense has allowed 19.6 points and 346.2 yards per game with eight interceptions, 29 sacks, and nine fumble recoveries. Eric Kendricks has 70 tackles and 4.0 sacks, Anthony Barr has 61 tackles, and Harrison Smith has 56 tackles. The Vikings are hoping to play their way into the playoffs.

The Chicago Bears have played in a lot of close games this season but it has all added up to a 5-8 record this season. The Bears offense is averaging 20.9 points and 350.2 yards per game with a minus two turnover ratio. Chicago QB Jay Cutler has completed 62.6 percent of his passes with 16 touchdowns and seven interceptions. Matt Forte is the Bears leading rusher with 721 yards and four touchdowns and Alshon Jeffery and Martellus Bennett each have 53 catches and three touchdowns. The Bears defense is allowing 24.2 points and 341.5 yards per game with seven interceptions, 29 sacks, and four fumble recoveries. Christian Jones has 75 tackles to lead Chicago, Shea McClellin has 73 tackles, and Adrian Amos has 58 tackles. The Bears have played well in spots but the back-to-back bad losses the past two weeks has them on the outside looking in at the playoffs.

One of the strongest trends this season has been that the bulk of the games involving the Bears have been decided by three points or less and the ones that aren’t the underdog wins outright and with he Bears getting more than three they are the play here.