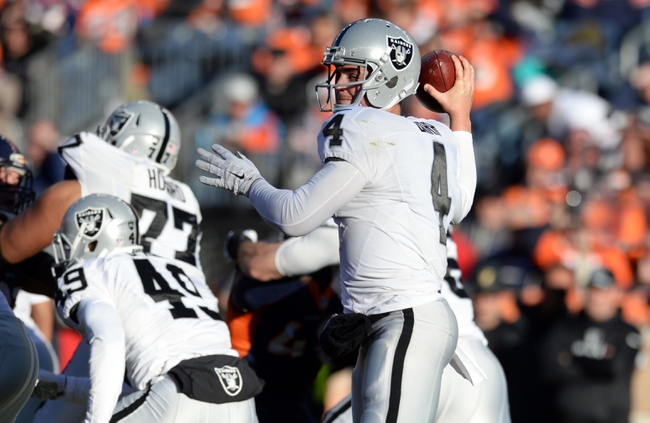 The Oakland Raiders and the Green Bay Packers face off on Sunday in Oakland in Week 15 NFL Football.

The Oakland Raiders are 6-7 this season and are coming off of a huge confidence-boosting win beating the Broncos in Denver. The Raiders offense is averaging 23 points and 344.5 yards per game with a net zero turnover ratio. Oakland QB Derek Carr has completed 62.2 percent of his passes with 28 touchdowns and nine interceptions. Latavius Murray anchors the Raiders rushing attack with 878 yards and five touchdowns and Michael Crabtree leads in receptions with 70 and seven touchdowns. The Raiders defense is allowing 25.1 points and 372.5 yards per game with 11 interceptions, 34 sacks, and 12 fumble recoveries. Malcolm Smith leads the Oakland defense with 96 tackles, Khalil Mack has 14 sacks, and Charles Woodson has five interceptions. The Raiders have been inconsistent but they are clearly a team on the rise.

The Green Bay Packers are 9-4 this season and in first place in the NFC North. The Packers offense is averaging 24.4 points and 348.6 yards per game with a plus seven turnover ratio. Green Bay QB Aaron Rodgers has completed 61.2 percent of his passes with 28 touchdowns and five interceptions. Eddie Lacy paces the Packers ground attack with 641 yards and three touchdowns and Randall Cobb is the top receiver with 65 catches and six touchdowns. The Packers defense is allowing 18.8 points and 350.2 yards per game with 12 interceptions, 35 sacks, and 10 fumble recoveries. Ha Ha Clinton-Dix leads Green Bay with 90 tackles, Nate Palmer has 65 tackles, and Julius Peppers has 7.0 sacks. The Packers control their own destiny and with Rodgers they always have at least a puncher’s chance to beat anyone.

This should be a good one and I expect the Raiders to leave it all on the field and get at least a cover if not the outright win.

The pick in this article is the opinion of the writer, not a Sports Chat Place site consensus.
Previous Pick
Houston Texans at Indianapolis Colts 12/20/15 NFL Score, Recap, News and Notes
Next Pick
Steelers vs. Broncos - 12/20/15 NFL Pick, Odds, and Prediction