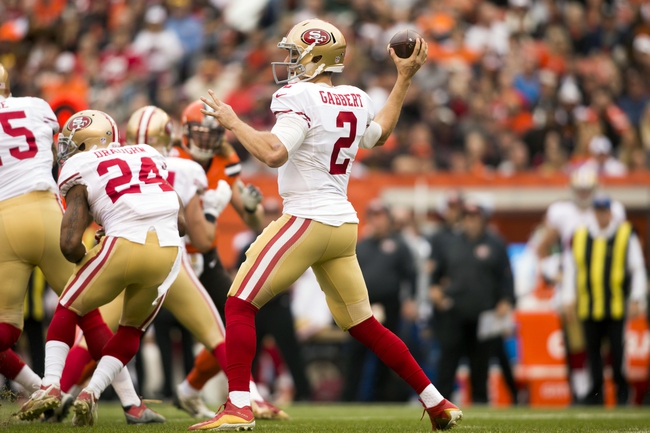 The San Francisco 49ers are 4-9 this season and they are in full rebuilding mode. The 49ers are averaging a NFL worst 14.5 points and 289.4 yards per game with a net zero turnover ratio. Niners QB Blaine Gabbert has completed 63.2 percent of his passes with six touchdowns and three interceptions. With Carlos Hyde gone for the season Shaun Draughn has taken over the rushing attack and Anquan Boldin is the top receiver with 51 catches. The San Francisco defense is allowing 24.2 points and 401.7 yards with nine interceptions, 22 sacks, and four fumble recoveries. NaVorro Bowman leads the 49ers with 124 tackles, Michael Wilhite has 85 tackles, and Aaron Lynch has 6.5 sacks. The 49ers are looking at their highest drafting position in many years.

The Cincinnati Bengals are 10-3 this season and in first place in the NFC North. The Bengals offense is averaging 27.2 points and 376.9 yards per game with a plus six turnover ratio. With Andy Dalto out A.J. McCarron takes over as the Cincinnati QB and he completed 69.4 percent of his passes with two touchdowns and two interceptions. Jeremy Hill has eight rushing touchdowns for the Bengals and Giovanni Bernard is the top rusher with 647 yards and A.J. Green is the leading receiver with 76 catches and eight touchdowns. The Bengals defense is allowing 17.6 points and 338.8 yards per game with 16 interceptions, 34 sacks, and eight fumble recoveries. Vincent Rey Cincinnati with 93 tackles, Reggie Nelson has 61 tackles and eight interceptions, and Dre Kirkpatrick has 56 tackles. The Bengals look to be a lock to win the AFC North but without Dalton they will have to rise to occasion as a unit.

Look for the defenses to et the best of this one so my free pick is going to be UNDER.