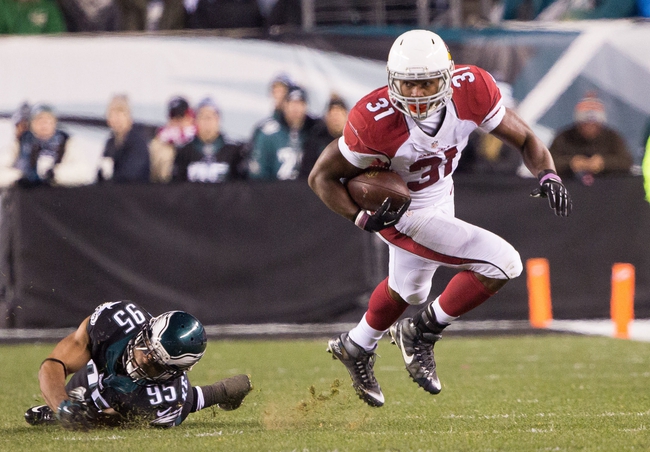 Wrapping up the weekend action on “Sunday Night Football” in the NFL’s Week 15, we had an NFC battle between the Cardinals and the Eagles. Arizona was coming off a narrow win over the Vikings in their last appearance, while Philadelphia edged out the Bills in Week 14. This would prove to be a very important game in playoff positioning this year.
Let’s check out a few of the notable players and stats from this one so we can determine why things happened the way they did. Afterward, we’ll look ahead to Week 16 to see what’s in store for both teams.

What Happened: Cardinals RB David Johnson got the scoring barrage started in the first quarter when he cashed in on a 1-yard TD run. A short time later, Caleb Sturgis would nail a 36-yard field goal to make it 7-3 Cards.
In the second, Chandler Catanzaro got in on the kicking action, nailing a 28-yard boot for a 10-3 Arizona lead. Zach Ertz would tie it on a 22-yard TD pass from Sam Bradford, but the Cardinals got the lead back on a 47-yard run from Johnson. At the break, it was 17-10 Arizona.
In the third, the Cards began to catch fire. Johnson added another 1-yard TD run, and Palmer hooked up with Josh Brown on a 16-yard TD pass for a 21-point lead.
They’d make it 28 in the fourth, when Deone Bucannon returned an interception 39 yards to the house.
Bradford would hook up with Jordan Matthews for a 78-yard TD, but it was too little, too late. After another Catanzaro field goal, the Cardinals took this one 40-17 in commanding fashion.
With the win, the Cardinals are now the NFC West champions at 12-2. The Eagles lie at 6-8 but can still get the division crown if they win out.

The Stars: Johnson was the real star of the show here. He logged 187 yards and three scores on 29 carries, adding four grabs for 42 yards more. Palmer was efficient but subdued, with a 20-of-32 line for 274 yards and the score.
On the other side, Matthews is the only one who really sticks out statistically, with eight grabs for 159 yards and a TD.

The Goats: The Eagles had a net 74 yards rushing, and couldn’t really get anyone going to keep the Arizona offense off the field (plus they were playing from behind for most of the game).
Bradford wasn’t at his best, either. He accounted for two picks and a lost fumble. Ryan Mathews also coughed one up.
Philly lost the time-of-possession battle here pretty badly: 22:32 to 37:28. Their offense is quick, but it shouldn’t be that quick.

Injuries: Palmer came out of the game briefly after injuring his finger during a pass, but he would return after one play and look just fine.
Bradford also came out for a play after a big hit. Backup Mark Sanchez came into the game for a handoff, but Bradford was able to return.

Outlook: Looking ahead to Week 16, the Eagles will be back at home against the incoming Redskins on Saturday, December 26 at 8:25 PM ET (NFL Network).
As for the Cardinals, they’ll host the Packers on the 27th at 4:25 PM ET (FOX).