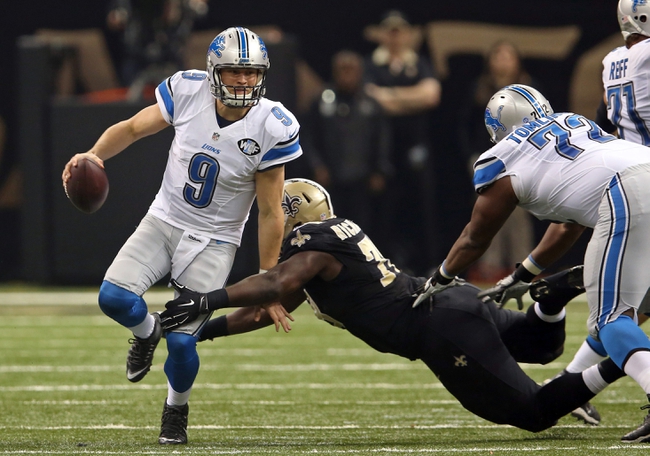 Rounding out the Week 15 NFL slate on “Monday Night Football,” we had an NFC matchup between the Lions and the Saints. Detroit was coming off a 7-point loss to the Rams in their last appearance, while New Orleans beat the Buccaneers in Week 14. Neither one of these teams will be making the playoffs, so this was more about pride on the national stage than anything.
Let’s check out some of the notable players and stats from the game so we can determine why things played out the way they did. Afterward we’ll look ahead to Week 16 to see what’s in store for both teams.

What Happened: The Lions started off strong in this one and were able to build a good lead before the Saints came storming back. The scoring started on a 1-yard TD pass from Matthew Stafford to Golden Tate. Kyle Forbath would knock in a 45-yard field goal to make it 7-3 after one.
In the second, the Lions began to pull away on a pair of Stafford TD passes, one to Michael Burton from four yards out, and one to Tate from five yards. When the teams hit the locker room, it was 21-3 Lions.
After the break, Detroit extended their lead on a 15-yard Ameer Abdullah TD run to make it 28-3. This is where New Orleans would start to turn it on, however, as Drew Brees hit Brandin Cooks for a 27-yard TD and a 28-10 result after three.
In the fourth, the Saints offense continued to ratchet up the pressure. Forbath kicked another field goal, this one from 22 yards out, before Marques Colston and Brees connected for an 11-yard TD.
The Lions offense finally stopped the bleeding with a 1-yard Joique Bell TD run, but Brees hit Benjamin Watson from 1 yard to cut it to one score at 35-27. The onside kick would fail, and that’s the way it would stay.
Both teams move to 5-9 on the year following this game.

The Goats: The Saints couldn’t get much going on the ground, with just 69 net yards rushing. They were only 5-of-14 (35 percent) on third downs as well.
On the flip side, the New Orleans defense allowed 396 total net yards with 150 on the ground.
This was something of a chippy game; the Lions were flagged 10 times for 92 yards; New Orleans got hit six times for 28 yards.

Injuries: Late in the second quarter, the Lions lost star CB Glover Quin to a concussion. He will have just six days to clear protocols before the Lions’ next game, which is a tall order for anyone.
Quin is one of the essential pieces of the Lions’ defense, and they’re much worse without him.
Brees hurt his right foot in the first half, but didn’t come out of the game. He’ll get an MRI today.

The pick in this article is the opinion of the writer, not a Sports Chat Place site consensus.
Previous Pick
Saints vs. Lions - 12/21/15 NFL Pick, Odds, and Prediction
Next Pick
Top Ten Worst 2015 NFL Week 15 Injuries